When the TOI smelt of coffee!

In an interesting innovation by O&M, HUL’s coffee brand Bru Gold greeted The Times of India’s readers on Sunday morning with the ‘smell of coffee’ 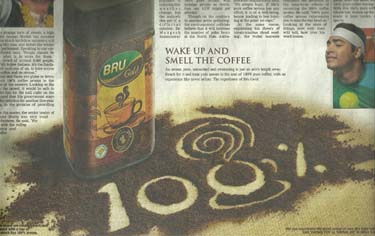 When the TOI smelt of coffee!

In an interesting innovation, HUL’s coffee brand Bru Gold greeted The Times of India’s readers on Sunday morning with the ‘smell of coffee’

After Volkswagen created ripples with one of the most innovative marketing ploys in 2010 through its 'talking newspaper' advertisement, it was the turn of Bru Gold to give readers an ‘aromatic newspaper’.

The half-page ad of ‘Bru Gold’ coffee literally greeted readers to ‘wake up and smell the coffee’. The entire ad, including body copy and visual, gave out the aroma rich and strong coffee. The innovation was aimed at giving the Bru Gold experience consumers in innovatively.

While the print ad has been conceived by O&M, the innovation of the coffee aroma was done by ideas@bharatkapadia.com, a specialised ideas consulting firm in media & marketing, based in Mumbai. Bharat Kapadia, Founder, ideas@bharatkapadia.com, approached Hindustan Unilever (HUL) a few months back with a sample of a fragrant ad. He had learnt that the company was planning to launch Bru Gold in the premium range.

On Kapadia’s demonstration of the unique idea, the response of HUL senior officials was exhilarating. “Senior executives at Hindustan Unilever were thrilled that they could drive home the richness of fine coffee by getting consumers to experience the aroma. With over 32 years in media, I knew we could conquer this final frontier in publishing and offer readers a sense of smell,” said Kapadia.

The aroma of coffee was added to the newspaper through a special technology executed by Kapadia that made the ad smell like 100% coffee. He explained that the technology used in the ‘Bru Gold’ ad is “highly innovative” because earlier people used to mix perfume with the ink, but that would tend to change the viscosity of the ink and the aroma did not last long.

Also, in the past, ‘scratch-n-sniff’ had been the only way sense of smell was addressed but it had several limitations. A patch containing tiny bubbles with aromatic chemicals was stuck as an additional operation, for which time and cost did not permit its execution in newspapers. Also, when one scratches the patch, a very small quantity of aroma is released lasting for a very short time. On the contrary, through this new technique, reader gets a pleasant surprise of smell without having to scratch as the whole newspaper spreads aroma which lasts for days.

Talking about the innovation, Anup Chitnis, Executive Creative Director, Ogilvy & Mather, said, “This is the first time that HUL has introduced a 100% coffee in the northern market which is majorly dominated by Nescafe. Thus, with this print, we have taken forward the positioning of ‘Piyo Zindagi Jee Bhar Ke’ forward from the TVC featuring Shahid Kapoor and Priyanka Chopra that had come out earlier.”

In an attempt to break through the dominance of market leader Nescafe in the northern market, the company is touting ‘Bru Gold’ as 100% coffee as it is non-chicory coffee, which will have better appeal to the North Indian palette through its distinct aroma and taste. It is to be noted that Bru already has a handsome market share in the South and it is the company’s first attempt to reach out to the northern market.

Besides the smell of the coffee, the print ad also shows stories of three people knit and their coffee fixation. The stories revolve around a politician, social worker and a tennis player declaring their love for coffee.

The print ad has gained fair amount of eyeballs. In fact, some of the interesting tweets about the ad read: “#TOI today wakes mumbaikars up with aroma of Bru Gold coffee - Marketing innovation at its best!!! A sample sachet would have helped!!!” Read another tweet: “Omg, I can smell strong aroma of coffee in my newspaper today…thanx to Bru coffee's new ad campaign…lovely.”

Interestingly, it is to be noted that in 2010, Hindi daily Dainik Bhaskar had come up with a “perfumed” newspaper carrying the fragrance of a Holi colour. The activity was also repeated last year also with a ‘kewda’ perfumed edition of the newspaper.

However, for the coffee aroma innovation, Chitnis said that it is a one-time innovation that is not likely to be repeated with the other variants of the brand.