Vinod Mehta calls it a day at Outlook

He will continue to serve the group as Advisor. He has been with the magazine for 17 years since its inception 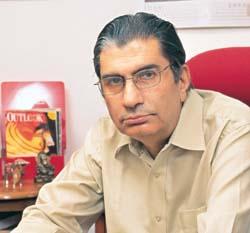 Vinod Mehta calls it a day at Outlook

He will continue to serve the group as Advisor. He has been with the magazine for 17 years since its inception

Krishna Prasad, Editor of Outlook, will replace him as the next Editor-in-Chief of Outlook Group.

The seniormost serving editor in the country, Mehta was born in Rawalpindi, Pakistan. His family fled to India when he was three. He attended La Martiniere School in Lucknow and subsequently went to Lucknow University.

Mehta has founded and edited numerous publications, mainly during his time in Mumbai. Among them are India's first Sunday paper, The Sunday Observer; the now defunct The Independent, Mumbai; and The Pioneer, Delhi. He was also editor of The Indian Post.

Mehta first came into prominence as Editor of Debonair, which was known for its centerfolds of semi-clad Indian female models.

He recently wrote his autobiography, ‘Lucknow Boy: A Memoir’, published by Penguin India. Mehta is also a popular face on television news channels appearing as a political commentator.

Also read our interview with Vinod Mehta in 2009: "Old magazine formula is irrelevant today, we have to change or we die"