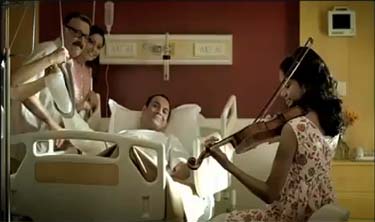 ‘Life is what happens to you while you are busy making other plans’, these famous words by John Lennon are the inspiration for the new advertisement campaign by ICICI Lombard General Insurance Company Limited, India’s leading private general insurance company. ICICI Lombard, through this campaign, emphasizes on the relevance of having a ‘Plan B’ in life. Exploring life’s situations where one’s plans can be hit by unexpected occurrences, the mnemonic ‘Aapke plan ko zindagi ki nazar na lage’ has been used to symbolize the message that unforeseen events should not be a hurdle towards fulfilling and your family from realizing your dreams and aspirations.

ICICI Lombard latest campaign premiers across television, radio and digital media sending a clear and desired message to its customers that ICICI Lombard can be your ‘Plan B’ to tackle costs which you might not have factored into your financial plans in an effective manner.

Commenting on the new campaign Shankar Nath, Head-Marketing & Direct, ICICI Lombard said, “At ICICI Lombard we believe in being there for our customers when they require us the most. Over the years, we have been fulfilling our promise to protect them at the time of unexpected occurrences in their lives. At some point in life, we all have sacrificed our dreams due to some unplanned situations. We believe that insurance is a key requirement which enables one to achieve their plans without being hindered by any unplanned eventuality. Through the campaign we have expressed this reality of life in such a way that one realises the importance of having a plan B.”

While it appears that the unexpected hospital expenses may lead to his being unable to afford the violin, it turns out that he has a Plan B - health insurance from ICICI Lombard. The TVC ends with the father smiling on his hospital bed, as he listens to his daughter playing to him on her new violin.

Commenting about campaign, D Ramakrishna (Ramki), Founder and Creative director, Cartwheel Creative Consultancy Pvt. Ltd., hopes that this campaign will create a strong foundation for the brand to build on. The TV commercial has been directed by Shivendra Singh of Dungarpur Films. What's notable is that the girl who has been cast to play the daughter, Jerusha Mendes, is herself a talented violinist from the Mehli Mehta Music Foundation, and has been learning music since she was four.