To be telecast on Sunday, February 5 on Zee TV with a simulcast on Zee Telegu also for the very first time 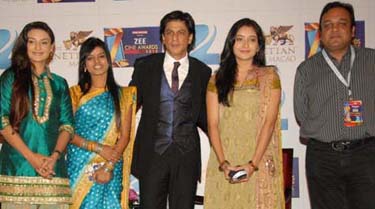 To be telecast on Sunday, February 5 on Zee TV with a simulcast on Zee Telegu also for the very first time

Zee Entertainment Enterprises Ltd (ZEEL), India’s leading television, media and entertainment conglomerate hosted the World’s Biggest Viewers’ Choice Award – Pan Bahar Presents Zee Cine Awards 2012 at Asia’s leading destination for business, leisure and entertainment, The Venetian® Macao-Resort-Hotel on 21st January, 2012. Since its inception in 1998, Zee Cine Awards has emerged as the biggest tribute paid to the world's largest film industry and has attracted renowned stalwarts of both Indian and international cinema. Besides the local citizens of Macau and several others from overseas who attended the glitzy ceremony, the awards will attract over 600 million viewers worldwide. In India, it will be telecast on Sunday, February 5 on Zee TV with a simulcast on Zee Telegu also for the very first time. 14 lucky winners of ZEE’s nominations’ contest were also flown in from India, the Americas, the United Kingdom, Asia Pacific (APAC), Middle East, North Africa, Pakistan (MENAP) and South Africa to attend the function live as it happens.

Punit Goenka, Managing Director & CEO, ZEEL said, “With each edition of Zee Cine Awards, it has been our earnest endeavor to take Indian cinema in all its glory and splendor beyond national frontiers and leave a memorable footprint at an exciting new global destination each year. The response from Macau has been overwhelming to say the least. This is the second year where we are working with the Sands group. After our successful association at Marina Bay Sands in Singapore last year, we are extremely happy to now associate with The Venetian® Macao as our hospitality partner as the property lends itself beautifully to hosting an awards show of the stature of Zee Cine Awards. I would also like to thank the Macau Government Tourist Office for extending exemplary assistance and facilities for the successful hosting of the awards.”

“Zee TV’s new positioning is “Umeed Se Saje Zindagi”. It reflects the idea of looking into the future with hope. It depicts a more dynamic and spirited outlook. Our content makes the common man its superstar and tonight at the Zee Cine Awards, we are happy to present superlative talent from our most popular dance reality show, Dance India Dance alongside the best of Bollywood on this platform. We also have in our midst today the new members of our popular shows, Krishna from Afsar Bitiya, Indira from Hitler Didi and Purvi from Pavitra Rishta. Add to that, we’ve roped in Shah Rukh and Priyanka to host the ceremony with Ranbir performing for the first time only in Zee Cine Awards,” he adds.

“The Venetian Macao couldn’t be happier about hosting the Zee Cine Awards this year,” said Edward Tracy, President and Chief Executive Officer, Sands China Ltd. “It’s such an outstanding event, and the CotaiArena™ is the perfect choice for a venue. With our experienced and knowledgeable events team on hand, Bollywood’s finest will feel right at home in Macau. It’s a pleasure and a privilege for us to host everyone tonight, as this exceptional star-studded event brings India’s top celebrities to The Venetian Macao.”

With the glitterati of Indian cinema descending on the Red Carpet at the awards ceremony, there was a huge scramble in the city for passes to the awards show. There was an enormous crowd building up right outside the venue to catch a glimpse of their favorite movie stars. Prominent amongst the celebrities walked the Red Carpet were Shah Rukh Khan, Priyanka Chopra, Ranbir Kapoor, Shahid Kapoor, Katrina Kaif, Vidya Balan, Rishi and Neetu Kapoor, Rana Daggubati, Farhan Akhtar, Ritesh and Genelia D’souza among many others.

The most exciting acts of the evening include Ranbir Kapoor dancing at an awards ceremony for the very first time. Besides his performance, the young Kapoor paid homage to his late grand-uncle Shammi Kapoor with a medley of his most popular dance hits and Shahid Kapoor rocked the stage with his moves as he raised a toast to the evergreen spirit of the late Dev Anand. Vidya Balan paid a scintillating tribute to the sirens from the South amongst the other highlights of the evening. Adding to the festivities, The Venetian Macao presented a lion dance, laser drumming, singing gondoliers, and acrobatic Shaolin monks.

It was an evening of glitz, glamour and appreciation that all Bollywood fans across the globe were waiting for. The nominations were announced on January 1, 2012 for outstanding film achievements of the year 2011. With millions of votes pouring in every year from across the globe, Pan Bahar Presents Zee Cine Awards 2012 is the most definitive measure of viewers’ choice in movie awards.