When Swapan said Counselage boss 'Suhel has a very small one'!

It takes two creative mavericks to tango. And the Counselage ad created for the Jaipur Lit Festival brochure was quirky at its best – created by the younger Seth for the elder Seth’s brand consultancy 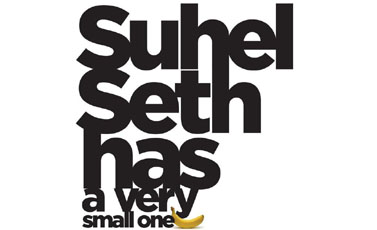 When Swapan said Counselage boss ‘Suhel has a very small one’!

It takes two creative mavericks to tango. And the Counselage ad created for the Jaipur Lit Festival brochure was quirky at its best – created by the younger Seth for the elder Seth’s brand consultancy

What comes to your mind when you first read the line “Suhel Seth has a very small one”? Are you stumped, surprised, amused or offended? Well, Suhel Seth, Managing Partner, Counselage, was elated when he first saw the print ad for his strategic brand management and marketing consultancy.

The Seth brothers – Suhel and Swapan -- over the years have developed their own brand of creativity – sharp, creative and often delightfully quirky. The latest rib-tickler is the brainchild of younger sibling Swapan who now runs Equus Red Cell as its CEO, a post handed over to him by Suhel who was the founding CEO.

The print ad for Counselage was created especially for the brochure of the recently held Jaipur Literature Festival. The brief given to Swapan was simple: to convey the message that Counselage is a small consulting firm with big revenues and the finest client list.

Said Suhel, “I wanted an ad because Counselage is all about me, but Swapan turned it around and suggested that even I am a brand by myself. So he married both the brand identities and that’s how the ad came out.”

The creative maverick that he is, Swapan took all of five minutes to “design” the creative within five minutes! While Swapan worked on the copy of the print ad, the artwork for the ad was done by Anurag Hira, the third co-founder of Equus Red Cell who had started the agency along with the Seth brothers. Anurag, who has since moved on, is currently Co-Owner of Kolkata-based One by One Design.

On being quizzed about the rationale behind a quirky take for the communication Suhel’s reaction to it, Swapan said, “I know for

instance that Suhel is an egoistic guy and for him to accept a line that says ‘he has a very small one’ kind of pulls the fact that at the end of day he just loves advertising that is disruptive and tongue in cheek. But I also know for a fact that nobody besides me had the guts to present this work to Suhel. Anybody else and that person would have been slapped!”

There’s no denying that ‘quirkiness’ as an element in advertising has always drawn the attention of audiences. It not only manages to create a top-of-mind recall but also establishes a refreshed imagery of the brand. Similarly the print ad of Counselage has not grabbed a fair amount of eye-balls of authors attending JLT, but has also captured the essence of the festival which is all about good and creative writing.

Kicked by the huge positive response to the ad, Suhel has now decided to use the print ad as part of a long-standing campaign idea for Counselage. And so far as Swapan is concerned, he said, “I have always maintained that in the many years I have worked with Suhel, I have always found him to be an extremely wonderful buyer of good creative work, both as a buyer and as my partner at Equus Red Cell.”