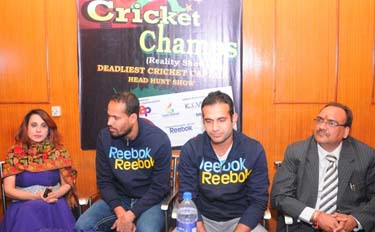 UTV Bindass, India’s premiere youth brand in association with Indraprastha All India Sports Foundation today announced the launch of first of its kind cricket reality show –“Cricket Champs”. The show is slated to go on air by February 2012 end.

Through this unmatched initiative UTV Bindass with Indraprastha All India Sports Foundation will seek to identify the budding cricket talent from across the country, providing an opportunity for potential young cricketers.

Cricket Champs will hold auditions covering 300 schools, colleges and coaching centers across India with renowned cricket representatives like Irfan & Yusuf Pathan, Keerti Aazad, Piyush Chawla and many more. The cricketers will be chosen in two categories: Under 16 & Under 22 in the following cities:

Once through with the auditions the selected participants will be judged on their performances by the Cricket Gurus. UTV Bindass viewers can also participate through voting and the contestant who receives the maximum votes cumulatively will be declared as the 'Cricket Champ'.

The winner of the show will win a cash prize of Rs. 10 Lakh and the top 10 players will get an opportunity to be a part of the IPL coaching, where they will be coached by some of the most renowned names in Cricket.

Commenting on this Keith Alphonso, Business Head- UTV Bindass said “We at Bindass are known to create path breaking programming and are happy to present to our viewers an exciting mix of sports and reality with Cricket Champs. The concept of the show has a purposive goal aimed at giving youth a platform to showcase their sporting talent. The show will bring alive the spirit of the youth and help promote the budding sports talent in India.”

The Chairperson of Indraprastha All India Sports Foundation, Rohini Rajdev asserted that, “IAISF aims at bringing talent from hinterland to mainland. As an NGO, we wish to create opportunities for those, who have a dream to become not only the Indian cricketer but also the Indian Captain, the Cricket  Champ, however, they do not have any opportunity and resources to fulfil their dreams. This show will help them in coming up and showing their talent. The entire country would horn their skill and abilities and give them opportunity to play higher league form”.

The aspiring cricketers can apply through application forms available with the coaches in their respective cities across the country. The form can also be downloaded from the IAISF website www.indraprasthasportsfd.com.