As a kid he fantasised about the work of the creative people after watching ‘Dream Merchants’. Today, he firmly believes that with clients finally giving space to creative experiments, advertising has become fun once again 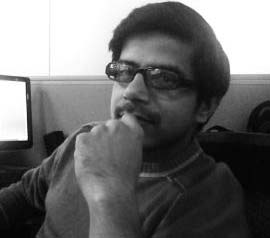 As a kid he fantasised about the work of the creative people after watching ‘Dream Merchants’. Today, he firmly believes that with clients finally giving space to creative experiments, advertising has become fun once again

It’s a strange that a majority of people aspiring to  make it big in advertising is either charmed by its glamorous setup or wants to break free from their mundane life. The logic of Vishal Sagar, Senior Copywriter, Cheil India, is no different. “I came to advertising running to run away from the 9 to 5 crowd,” he says.

After completing his Bachelor of Engineering in electronics and communication from Institute of Engineering and Technology, University of Rajasthan, the obvious choice for Sagar was to take up a job as an engineer. But he joined an events company in Jaipur for a brief period. And before he could even learn the tricks of the business, he floated his own event agency. “It was here that I realised that I want to do something more creative in life,” he explains.

The, following his inner call, Sagar shifted his base to Delhi for a formal education in advertising and pursued a PG Diploma in Advertising & PR from Sri Aurobindo Institute of Mass Communication.

Contrary to the popular belief that it’s easy to follow leaders, when it comes to following your heart things seem otherwise. Sagar had an altogether different experience. Luck was on his side, as soon after completing his Advertising & PR course, he was placed as a trainee at Saatchi & Saatchi. The break not only saved him from knocking on the doors of several agencies for work but also proved to be a learning curve for him. Recalling his first experience at an agency, he reminisces, “It was a dream start under the supervision of some of the best brains in the industry. The legendary Nandu Narsimhan and the likes of Shiva Kumar, Vijay Simha, Jayant Mathew and Rajesh Gola had so much to teach that every day turned out to be a great learning experience.”

Sagar had five months of rigorous training at the agency. He had honed his skills and learnt the finer nuances of advertising. And, he was asked to handle the creative mandate of Sony Ericsson.

But all good things come to an end, and his romance with Saatchi & Saatchi ended thereafter. He moved to Bates 141 that was poised to return to its golden days around that time. “The place was coming alive with fresh blood. The team clicked well and proved invincible as a unit, winning 10 pitches back to back in less than a year,” he recalls.

The good part was that during his tenure at the two agencies, Saatchi &Saatchi and Bates 141, Sagar got a chance to brush his hands on multiple brands. This included clients like Mother Dairy, Videocon, MTS, Rosebys, Sony Ericsson, Magic Moments, Zen Mobile, Monte Carlo, Center for Sight, Wyn Medicare and Netambit.

It is this never-ending quest for challenges and exposure that took him to Cheil India that primarily caters to the creative solutions for a single giant brand,Samsung.

Having being inspired by two creative hot shots of advertising in his life, David Droga and the late Nandu Narsimhan, Sagar is a firm believer in simple ideas. “I think great advertising is a simple solution to a problem,” he says.  He lists two examples wherein an uncomplicated idea was turned into great advertising. “Imperial Blue’s ‘Men will be Men’ campaign and Volkswagen’s ‘fun theory’ are great concepts that caught the imagination of common people in the real world.”

Advertising today has moved away from benchmarks, and every day the creative people come across something that pushes advertising to a whole new level, believes Sagar. “Sometimes the idea is too simple and sometimes the execution leaves you breathless,” he says. And his work stands testimony to this and throws light on how he has been pushing his limits every single time.  Like for Zen Mobile’s 3D phone campaign, Sagar and his team came up with an innovative poster through a French technique that converted traditional 2D poster into 3D. “It took us a lot of time to understand and master the technique. We faced a lot of difficulties at various levels. But it was great fun, discovering something new every now and then. Finally, after a lot of science and art, we completed it and presented it to the client. He loved it the moment he saw it. That was a reward for all the time and hard work we put in.”

Even after spending three years in advertising, for Sagar it is not the awards that motivate him but the recognition of his work.  "I would like to continue working with great minds, continue learning and do campaigns that transcend the boundaries of time and space. For me, a kid humming my jingle or strangers talking about my ad matters more than anything else. And I want my life to be full of such beautiful instances,” Sagar says in parting.