What I love about advertising is the madness, the informality, the freedom to be the way you are and the diversity of creative talent that exist 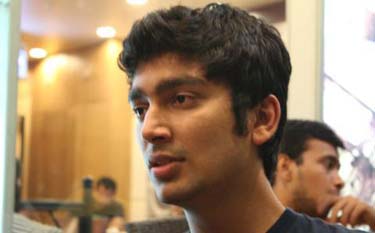 “What I love about advertising is the madness, the informality, the freedom to be the way you are and the diversity of creative talent that exist” Neha Saraiya | Delhi | January 9, 2012

He may be just 24 of age, but he has tons of experience already under his belt. Chintan Ruparel, a copywriter at Taproot India, has already carved a niche for himself by working closely with two advertising’s best-known creative minds, Agnello Dias and Santosh Padhi. Needless to say, his impressive list of work includes projects like Lead India 09, Teach India, Aman Ki Asha, A Day in the Life of India and Airtel’s Har Friend Zaroori Hota Hai.

Ruparel’s love affair with writing dates back to his classroom benches of St. Joseph’s High School in Wadala, Mumbai. At that time, he was a loner who used to scribble poetry on the back pages of his notebooks. However, his aloofness was not liked by his friends. “I was often ridiculed by my friends for being such a bore,” he says.

Unaffected by his friends’ coldness and encouraged by his English teacher to pursue his love of writing, Ruparel continued with his interest at Jai Hind College where he studied Commerce for two years. About his experience at the college, he says, “I anxiously waited for the English paper to flaunt my essay writing skills!” After completing college, Rurarel’s English language fixation pushed him towards the dream of becoming a journalist, leading him to enroll for the BMM (Bachelor of Mass Media) course at S.I.E.S College of Arts, Science & Commerce.

Just like any young student, Ruparel recalls his BMM days as a total joy ride. His early days spent at the Mass Media course taught him the two most important things of the corporate culture -- ‘Power Point presentations’ and ‘deadlines’.  Ruparel thereafter started off as an intern with a small ad agency called ‘Prachar’. But he had hardly anything on his plate in terms of work at that time. “I didn’t do much there except mug award books and dig sites like adsoftheworld.com.”

But he soon realised the perils of idleness, Ruparel quickly shifted to his next challenge, which was to work in the creative department of a big agency. And it didn’t take long for his dream to come true as within a year he joined the Mumbai office of O&M. “It was such a pleasure learning the ropes from Creative Director S Ramamurthy and Copy Supervisor Vinod Sudheer, who spent a lot of time on me. My stint at Ogilvy was the best education I could have received,” he recalls. During his tenure as a Copy Trainee at O&M he got a chance to work on brands like Neo Cricket, Principal Mutual Funds and Brooke Bond 3 Roses.

Due to his super fine skills and out-of-the-box thinking, Ruparel was escalated to the position of a Writer at the agency within just eight months of his joining. But he declined the offer because of an incident. He chuckles as he reminisces, “A friend and a senior dropped me a link on chat one evening. It carried an article of two industry stalwarts starting their own agency and were looking for youngsters. I jumped at the opportunity to work with the top guys and pestered Aggi to let me meet him. After some phone calls and text messages, he finally relented and today I’m glad he did.”

Even though he spent a fair amount of time at O&M, he still considers Taproot India as his first real job and cherishes the first six months at the agency wherein he worked as the only writer alongside Aggi. In fact, he believes that the biggest challenge for any writer is to directly work with Aggi in the early days of his career.

He admits that in the initial days he used to closely watch, learn and practice till he wrote anything half as good as his copy. But that’s not all. Besides Aggie’s flawless copies, it’s Paddy’s energy levels also that raise a concern for Ruparel. He explains, “Everything else is possible but not that one. Paddy sits right behind me in office and I still don’t know what keeps him going. Is it the food in that dabba? Is it the hunger for good work and awards?”

It has been almost three years at Taproot India for Ruparel and he can’t get enough of it. Quiz this young kid on the block to recall one campaign for which may have literally burnt the midnight lamp, he perkily replies, “ It was an open brief to all the writers in the agency to crack the television commercial for The Times of India’s new initiative, ‘A Day in the Life of India.’”

Interestingly, for the first two rounds of the internal presentation, Ruparel was quite blank in terms of ideas. Notwithstanding the sinking feeling, he escaped for a family holiday where he sulked for having lost such a huge opportunity. So, one late night in the hotel room, he decided to give it one last shot and imagined what would happen if an elephant escaped the circus premises in a small town -- the real circus would play out on the streets!

Similarly, without caring about the result, the next day Ruparel tracked down a nearby cyber cafe, typed out a two-page script and mailed it to Aggi who then took it to another level along with Director Abhinay Deo. The two-page script turned out to be his first ever TV commercial.

Few people know that the hobby of writing poems that he developed in school today enables him to crack a headline in seconds. He also dabbles in lyrics as and when given a chance. And as far as his weakness is concerned, it’s more like an industry weakness, as he puts in his own words, “Any creative will tell you, it is cracking the digital medium.”

Today, even after delivering some successful campaigns and winning awards at various platforms including the Abbys, Mirchi Kaan and at Spikes Asia, Ruparel still enjoys and envies all the work that comes out of W&K Portland. There is glint in his eyes when he says, “Those guys are pushing the boundaries and how!”

Closer back home, he wishes to do the creative for Ceat Tyres and the recent ‘Google Chrome Tanjore’ commercial.

Although Ruparel’s age and his fantastic track record can cause envy amlong many, the young ad man has his head in place. On being asked about his future goal, Ruparel says, “I just don’t want the enthusiasm to wane. I don’t want to get complacent and not do my best on any brief. And the biggest challenge of course is to do solid brand work that also wins awards.”

What is his ultimate goal? He wants to see a scam-free industry where ‘Effies’ and the ‘Abbys’ merge and the only way to win metals is by pushing good work on client briefs. He is surely wiser and more than his years.