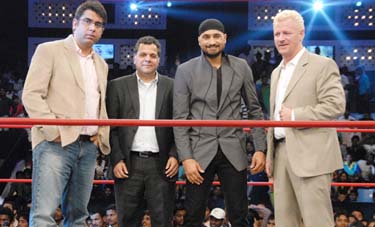 Colors has always introduced differentiated reality shows. This time too it is no different as it prepares to launch 'Tata Prima Trucks Ring Ka King'. It is a sports entertainment reality show that will go on air from Saturday, January 28, 2012 at 8 PM with subsequent episodes airing on Saturdays and Sundays at 8 PM.

Raj Nayak, CEO of Colors, said, “We truly believe that the show will appeal to our viewers and advertisers who are constantly looking for new and innovative platforms to reach out to their audiences.”

A total of 30 top Indian and international wrestling superstars including Jeff Jarrett, Matt Morgan, Scott Steiner and Monster Abyss; Indian wrestlers who have received international-level training like Jwala, Mahabali Veera, Romeo Rapta, Zoravar and Deadly Danda amongst others will be part of this show. Of these 30, 14 are Indian wrestlers and the rest are international, and there will be championship matches to decide on the final winner.

Indian cricketer Harbhajan Singh has been roped as the goodwill ambassador.  Speaking about his association with ‘Tata Prima Trucks presents Ring Ka King’, he said, “As a kid I have always been interested in wrestling. Mein bachpan mein Judo champion hua karta tha. Par uske baad cricket meri life ban gayi. Varna shyaad mein Olympic Judo Champ hota. Being on the cricket pitch has given me the right fighter attitude that is essential to control these wrestlers. I am extremely charged for Ring Ka King. After many years, here’s a mind-boggling reality show that is a perfect mix of action, sports and entertainment that will keep audiences on the edge of their seats.”

When BestMediaInfo quizzed Nayak as to why Bhajji has been roped in, he said, “We have worked with many Bollywood stars like Akshay Kumar for ‘Khatron Ke Khiladi’ and even Salman Khan for ‘Bigg Boss’. Though both would have gelled with the image of this show, it was decided that as it’s a sports show, it will be better to have a sports personality to take the association forward. After which, our research team came up with three-four suggestions and it was found that Harbhajan would be an ideal fir for a reality show of this format.”

Though this is a wrestling based reality show, the audience will not just see a whole lot of action but also a full dose of drama, emotion and entertainment. Explaining the concept of the show further, Deepak Dhar, MD, Endemol India, said, ''It's an exciting format for us to work with. For the first time ever we are combining sports and entertainment to create something very different and very exciting. While the focus of course will be on the wrestling matches, it is the entertainment and the drama aspect of the show that will put the matches in perspective and make them a lot more interesting. Endemol has entered into a partnership with TNA Entertainment to popularise professional wrestling. Endemol fulfils its commitment to India by constantly bringing best-in-class entertainment.''

Jeff Jarret from TNA, who represents the international wrestlers participating in the show, said, “Tata Prima Trucks Ring ka King is a very exciting project for us at TNA. We know TNA has a lot of fans in India, especially younger fans, so the enthusiasm levels are higher than ever. At the same time, the format of the show is very interesting which will allow fans to see their favourite wrestling stars as not just wrestlers but real people. Of course, we are looking forward to put on an adrenaline-filled show that will get all our fans super excited! Let’s see who out of these 30 amazing wrestlers beats the rest to take away the title of ‘Ring ka King.’''

On being title sponsors for the show, Vinod Sahay, Head - Sales & Marketing, Medium & Heavy Commercial Vehicles, Tata Prima Trucks, commented, “We believe integrating our majestic Tata Prima heavyweight trucks with Ring ka King represents a natural fit for both our brand and the show. The Prima range of trucks, tractor trailers and tippers bring to India international standards of power, performance and endurance, which ties in very well with the ‘Ring ka King’ format which aims to bring international standards of wrestling to our country incorporating the same attributes of power, performance and endurance.”

‘Ring ka King’ will be one of the biggest reality shows introduced by Colors and it will be leaving no stone unturned to make its launch a high-decibel one. The channel currently has plans to extensively use television, newspapers, outdoor and digital media to ensure that they are able to reach out to their target audience.

The core TG for this reality show will 16-34-year age-group male skewed. However, Nayak mentioned that though this is the target audience, kids are very fascinated with wresting and may also prove to be great viewers for the show.

Though the marketing budget was not disclosed, the colors team did mention that it will be spending similar amounts on the launch of this reality show as spent for all its big-ticket reality shows like Bigg Boss.

Orchard, which is the creative agency of Colors, will be creating promotions for ‘Ring ka King’.