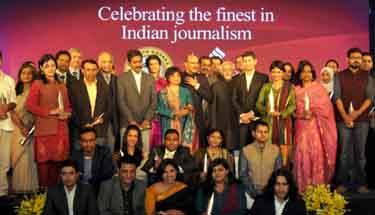 The Express Group celebrated excellence in contemporary Indian journalism at a glittering function Monday evening, by honouring 36 of the country's best journalists at the fifth Ramnath Goenka Awards for Excellence in Journalism.

The awards, instituted by the Express Group, recognised outstanding work done in 2009 and was given away by Vice President Hamid Ansari at the Taj Palace Hotel, New Delhi.

Stories awarded highlighted a range of issues, from Naxalism to economic slowdown, dying rivers to devastating floods, addressing contemporary India and its myriad challenges. As jury member and former Indian ambassador to the US, Naresh Chandra has said: “The entries included a broad range of subjects and the stories addressed a wide range of concerns.”

The awards were instituted by the Express Group in 2006 to acknowledge and celebrate stories that needed to be told while adhering to the highest standards of ethics.

List of winners of ‘The Ramnath Goenka Awards for Excellence in Jounalism 2012’: