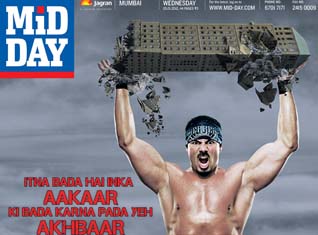 Colors has launched an innovative 360-degree integrated marketing campaign to kick-start its biggest sport entertainment reality show, ‘Tata Prima Trucks presents Ring Ka King – Wrestling Ka Mahayuddh’, which is going on air on January 28, 2012. The print campaign revolves around the theme ‘Size Does Matter’ with Mumbai’s tabloid Mid Day highlighting the larger than life characteristics of the wrestlers. On Wednesday, January 25, Mid Day readers will see the publication in a broadsheet avatar to convey the image that the wrestlers are so large that they would not fit in the tabloid’s normal format!

The idea behind the campaign is to build on the thrill and entertainment value that the content of ‘Ring Ka King’ will provide to audiences on television. The campaign will focus primarily on print and outdoor media to emphasise the impact and magnitude of ‘Ring Ka King’. Highlighting the fact that a special affair calls for a broader and bigger canvass, the copy of the print ad communicates the launch in a dazzling and eye-catching manner 3 days in advance as it says, “Itna bada hai inka akaar, ki bada karna pada yeh akhbar. Teen din pehle de rahein hai khabar, Taaki aap rahein tayyar.”

Commenting about the integrated marketing approach, Rajesh Iyer, Head – Marketing, Colors, said, “The ‘Ring Ka King’ thriller campaign is the physical representation of the excitement that the show embodies. We wanted to bring the action of the ring alive throughout our communication. To bring out the adrenaline pumped exuberance of the show into our promotional activities we collaborated with our creative partners to come up with a campaign which could do full justice to the thought. All our promotions for ‘Ring Ka King’, be it the print innovation with Mid Day or disruptive campaign across outdoor, radio and TV, is high on volume and scale.”

Manajit Ghoshal, MD & CEO, MiD Dy Infomedia Limited, commented, “This broadsheet innovation employed by us is a powerful and stimulating manner of advertising. It introduces a surprise element, which helps in better absorption and recall of the communication. The broadsheet innovation also ensures a fresh break for our readers. It has been our continuous endeavour to create path-breaking strategic solutions for each of our clients to reach their target audience. This innovation is one more step in that direction as it strengthens our reputation for innovative advertisement in the market.”

For the outdoor campaign, the primary aim is to showcase the scale and impact of ‘Ring Ka King’ in 70 trade markets to amplify visibility. This will be executed through a mix of billboards and other mediums that reach the target audience. Audiences will witness billboards being stretched or ripped apart by the wrestlers so that the magnitude and intensity of ‘Ring Ka King’ is highlighted.

The overall theme for the television, radio and cinema campaigns is ‘disruption’. Ads and promos running across media will focus on wrestlers interrupting regular content to talk about ‘Ring Ka King’. The channel is partnering Radio City to take ‘Ring Ka King’ on air and engage with listeners. Two special characters will be created on-air to talk about the show. The channel is also associating with ‘Agneepath’ to promote the show through cinema. Additionally, the digital campaign involves creation of special applications on social media platforms like Facebook to interact with audiences and build connect with wrestling.