The Indian adaptation of the international series to premiere on 6th January, 2012 at 9pm slot 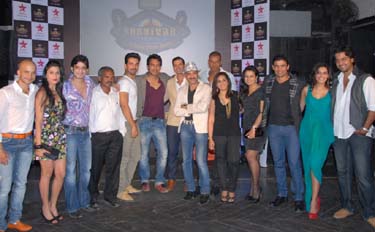 STAR Plus rings in 2012 with new reality show ‘Survivor India’

The Indian adaptation of the international series to premiere on 6th January, 2012 at 9pm slot BestMediaInfo Bureau | Delhi | December 26, 2011

STAR Plus, will usher its viewers into the New Year by bringing to their homes, world’s most sought after reality show-' Survivor'.

Survivor India will witness, twenty two extraordinary participants in its opening season, some well-known, and some not so known, some trying to prove their mettle, some wishing to push boundaries. However, all gearing towards the ultimate challenge of'Survivor India'!

Marooned on an uninhabited tropical island of Philippines where even basic minimum amenities aren't available, Survivor India will be ultimate game of physical and mental endurance. Its well encapsulated tagline-‘Jo Tikega, Itihaas Likhega’/ Kya Jee Paoge? is a testimony, that only the fittest, the grittiest and the ruthless will survive and will be the ultimate winner of this show. Nitin Vaidya, Business Head, Hindi Channels, Star India, said, “STAR Plus has brought its viewers the ultimate reality formats, whether international or home grown. It was time for us to present another breakthrough concept on the Indian television and hence Survivor India is the perfect New Year gift for our viewers!" He added, “The series will showcase a life-changing journey of 22 individuals battling for survival, in a do-or-die situation. We firmly believe and hope that our viewers will live every moment of this exciting journey with our participants.”

Star Plus has redefined the Hindi GEC space with a robust fiction line up across all time slots. With contemporary and distinct fiction content, iconic characters, unparalleled non-fiction formats & events to its credit & the renewed brand promise of Rishta Wahi Soch Nayi that reflects in its content, STAR Plus has set the agenda for the Hindi Entertainment genre in India.

The opening season of SURVIVOR India will have some of the known faces like Payal Rohatgi, Shilpa Agnihotri, JD Majethia, Sangram Singh, Abhinav Shukla, Karan Patel, Timmy Narang, Sylvester Rodgers, Priyanka Bassi, Rajesh Khera and Munisha Khatwani - contesting against each other for survival as the battle gets wild and wicked.