‘What if a thirsty one, always in search of a well, finds it and then asks the well to warm the water for him. Too much to expect, right? This is exactly the scene with marketers today’ 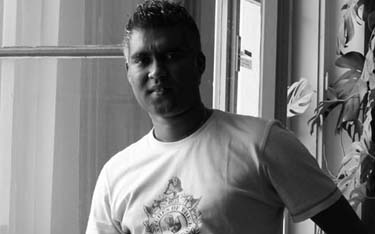 ‘What if a thirsty one, always in search of a well, finds it and then asks the well to warm the water for him. Too much to expect, right? This is exactly the scene with marketers today’

Contrary to the popular saying ‘there’s a woman behind every successful man’, in the case of Kapil Tammal, 31, Creative Director at Scarecrow Communications, it was a man who pushed him to the world of advertising. His first step in the field of creativity was not through the usual route of training in an ad agency and then climbing the ladder gradually. After completing his SSC, he joined an art school, much because of his father’s insistence. “My dad is the reason behind me getting into art. After completing my SSC, I was enjoying my vacations big time. One evening when my dad saw me watching TV, he strongly suggested I join an art school,” he says.

Tammal hardly knew what an art school taught! “I think my dad has the same vision that Subhash Ghai had; he could see the hidden artist in me. Maybe he was impressed with my efforts at sketching distorted figures during my school days which I used to do with the intention of skipping studies,” he chuckles.

So what began took off more as an escape from studies opened up new gates for him. “My dad pushed me towards art. I decided to go for the best, hence applied for JJ Institute of Applied Arts’ entrance exam. But I was rejected for the Bachelor for Arts course. Then I enrolled for a proper foundation course in applied art at the Indian Art Institute, Girgaon. It was a yearlong course. That’s where I developed an interest in art and design,” he says.

Tammal simultaneously enrolled himself in B.Com classes in a night college. But the schedule of handling two courses became a tough call. He had to make a choice – and he plumbed for art rather than commerce. After completing his art course, Tammal’s was selected by the JJ Institute of Applied Arts the following year. Finally, he got his BFA degree! And then the confusion began again – it was a toss between photography and advertising. Tammal picked advertising, not because he was fascinated by the creative churning but because photography was an expensive affair.

Then came the difficult task of job-hunting. “Even if your portfolio is outstanding, it cannot convince recession,” he says. Tammal appeared in as many as 16 interviews in mainstream ad agencies but luck wasn’t on his side. Once again, the man in his life came to his rescue, and he was placed as a trainee in Concept Communications at zero salary through a common friend’s reference. But soon he was elevated as a ‘visualiser’ at the agency.  Tammal’s stint at Concept gave him “real exposure” to the world of advertising wherein he worked initially on financial and IPO brands such as SBI and HDFC Mutual Fund under the guidance of Sanjay Sure. It was during this time that he bagged the first Silver Metal of his life -- for a competition called ‘Brand India’ organised by Abbys.

He then hopped to Triton after spending two and a half years at his first agency. If Concept made him a jack of financial brands, Triton enlightened him on various facets of advertising including teamwork, agency culture and FMCG advertising.

But his restless mind would not let him settle down at one place. After a short stint of around six months at Triton, he joined Umbrella Design and worked under Bhupal Ramnathkar, the man he admired in college. “He was my biggest push to shift to a design house. Under him I learned the discipline of art which is missed in the syllabus.”

Tammal describes his early years in advertising as ‘post-graduation in the art of communication’.  Thus, wandering in quest of something new once again, in 2006 he was introduced to the creative duo of Manish Bhatt and Raghu Bhat through one of his ex-Triton colleagues. It was Manish Bhatt’s first words to him after seeing his portfolio that touched him deeply, mainly because he thought that Manish Bhatt (who was then Senior Creative Director at McCann Erickson), his father and Subash Ghai shared one common dream. He still reminisces Bhatt’s words: “It’s not your work; it’s the style of people with whom you have worked with.”

So, after 16 struggling interviews, three jobs and a couple of years in advertising, he finally landed at McCann Erickson as Creative Solutions – Art. It was a fancy designation, a huge set-up and lot of exciting work for him.

McCann allowed him to work on a diverse set of brands such as Vaseline, Nerolac, Hanes , Wonderbra, Onida, L’Oreal, Maybelline, NDTV, Pears,  Neo Sports/Cricket, The MobileStore, Cathay Pacific, The Economic Times, Shanti Amla, Siemens, Reliance BigCinemas and Indian Oil, to name a few. In two years Tammal was promoted to Group Head at the agency and then elevated as Creative Director – Art the following year. Sharing his experiences at McCann, Tammal says, “Including Raghu and Manish, I got to work with the best brains in the industry. The responsibilities and the liberty that was given to me by Raghu and Manish in the early stage of my career at McCann made me what I am today. Later, working with Prasoon Joshi on some of the prestigious pitches and brands made my stint fruitful at McCann.”

It was a six-and-a-half-year itch at McCann that made him restless again. This time Tammal was looking to work on a different set of brands and campaigns. And that happened when Manish Bhatt and Raghu Bhat (both ex-Senior VP & ECD, Contract and McCann) along with their ex-colleague at Contract, Joy (Arunava) Sengupta (ex-VP, Account Management), and Vivek Suchanti, MD of Concept, launched Scarecrow in 2010.

Some of the awards for Tammal during his various stints at different agencies include a Gold Press, Silver Poster and Bronze Press at GoaFest for UTI Bank in 2006; a Bronze Metal at Cannes, 2 Bronze Metals in Outdoor and Media category at Spikes Asia, and a Bronze at Asia Pacific Ad Fest for Anando Milk in 2008 and 2 Bronze Press, a Silver Press and a Silver Press Craft - Art at GoaFest for Cocco’s Café in 2009.  He has also received the Young Spikes runner-up for Bali Tap Water.

Working for Scarecrow has been an interesting challenge for Tammal, primarily because he knows that Scarecrow is run by founders known for their creative brains. “It gives me lot of opportunity to do something different while staying in advertising. Being one of the first team members, it gives me lot of opportunity to experiment. It’s a unique mix of communication of design. The kick is different out here -- more focused and hungry.”

Now, after spending almost a decade in advertising, delivering successful campaigns and grabbing a handful of awards, Tammal just wants to keep scaling new heights with one sole ambition. “I defiantly would love to work with Kesselskramer in the future and add a few grams to their book. I would also love to work under Erik Vervroegen some day,” he says.

This time he certainly knows what he wants to do!