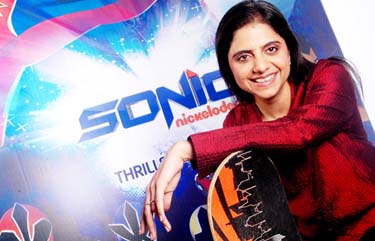 After undergoing rigorous research and planning for almost eight months, Viacom18 has its sleeves rolled up for its latest offering, ‘Sonic’. The fifth channel from the group, slated to go on air within this month, aims to cater to the segment of ‘Grownabes’, referring to the age group of 10-17 years. The channel not only bridges the gap between the audiences maturing from Nick and apprehensive about switching to MTV, but also sets the direction towards expansion mode.

In Delhi recently, Best Media Info caught up with Nina Elavia Jaipuria, EVP & GM, Sonic and Nick India, who is leading the pack for Sonic, after a successful show with Nick. And like a kid who has completed his homework on time, Jaipuria is all smiles as she shares her plans for the new project. Excerpts:

How did the idea of launching a channel for this segment occur?

To put it in perspective, we have worked with kids for long now with Nicklodeoan, and therefore we realised our hypothesis. There is a kind of segment sitting out there which is exiting kids but not yet youth. They are almost on the cusp of adulthood. The post-kids youth kind of TG has really been ignored. We think this is the newa-age young adult that we are talking about. Attitudinally I call them ‘Grownabes’ because they are almost 13 but going at 18. They are almost like wanting to make quick decisions but have a parental regulatory control. So they don’t have that advantage of breaking free and doing their own things. Therefore, there is a constant tussle of wanting to do something which they can’t. Everything they do is speed surpassing. We are looking at 10- to 17-yaer-old, hyperactive, very confident, competitive youngsters, their need for adrenaline and who are very wired. That group has been ignored, they have been wanting to move out of Nick but don’t know where to go as the youth segment is almost very adult.

Also, this target audience is very influential as they are early adopters, trendsetters and in-house consultants. Their DNA is thrill, technology, web and social media, and they are trying to break free from their cocoon. There is no platform that caters to this audience, and that is where the need gap was. Their need to speed has been ignored as action and adventure have been underserved. This is the potent combination that gave birth to Sonic.

What kind of planning went for the project after identifying the TG?

We validated the need gap with Quantum who validated our hypothesis and we did a very detailed study in four cities -- Mumbai, Delhi, Lucknow and Indore. This took a very long time as ethnography takes months because it involves questioning and observation. It’s almost a 360 deep dive to the responses. We also tested our content with them to know if what we are delivering is the need for their speed.

They are snacking for action and adventure. So, sometime they are on ‘Roadies’, at others on ‘Man vs Wild, or ‘Fear Factor’. Otherwise, they are on YouTube looking for Korean animation or they are on movies because movies give them action. Otherwise they will be hooked to gaming like Halo 3. That’s where they are getting their adrenaline boosters. Kids don’t want to watch edutainment any more. They want entertainment.

Why ‘Sonic’ as the name?

Sonic is metallic, it’s supersonic. It’s about speed, sound, fast jets. Thus, it’s kind of self-explanatory. We have chosen blue with a dash of orange in the logo because we wanted to create an environment where these kids want to be.

Who is behind channel’s design and Packaging?

It’s been designed by a UK design firm called Red Bee. It’s the same agency that has done the packaging for channels like BBC and Sky. Our attempt at Viacom is to try and create specific brands for every single possible viewership segment -- kids, pre-youth, youth, housewives. We want to create a loyal viewership base within the network so that as they grow and as their needs differ, we are with them either tapping through an age group or a segment. We are constantly trying to create as many brands as we can. That’s how Sonic fits in, with the perspective of being under the Nickelodeon banner. So, we have two distinct brands under the umbrella -- Nick which is humour and comedy for the 4-14 year age group and now we have Sonic which is AAA -- action, adventure and animation.

Animation has come of age in all counties other than India. So, be it Korea, Japan or the West, it is being consumed by the non-kids TG through television, movies and games.  Now, it’s coming to India for the first time through Sonic as I think it’s time for us to inch towards animation. And mind you, cartoon is not equal to animation. Secondly, if our desire is to provide superlative action to the audience, then the alternate world or universal animation is the only way to give them action. Therefore, 85 per cent of the offering of the channel is animation.

We have ‘Shaktiman’, the first Indian super hero in an animated avatar, created by Big and licensed from Mukesh Khanna. Then we have Kung Fu Panda, in a TV series called ‘Awesomeness’. Besides, we have animated shows on Jackie Chan and King Kong. There’s also a different kind of an action show based on soccer called ‘Super Striker’, with a lot of blood, sweat, challenge and thrill. Then, as we move to the latter part of the day, we have a block called ‘Sonic Extreme’, which is a kind of live action on the channel. Then there’s ‘Adrenaline project’ which is really about these young adults being challenged in physical and mental tasks. There is also an edge of the seat horror show called ‘Are you afraid of the dark?’ So, really the attempt is to drill down into various segments of action and adventure and take it to the next level. On weekends we have a movie block called ‘Sonic Flix Block’, that will have titles like ‘Dabang’, ‘Ghajini’, ‘Gladiator’ and ‘Jurassic Park’.

Other than Hindi and English, which regional languages will the channel reach out with?

I think the other pioneering thing that we are doing is putting it into regional languages, four multilingual HSM channels. So this is not the usual suspect of Tamil and Telugu.

What are the plans on the distribution front?

We have aggressively invested in distribution and we will probably achieve more than 40 million households in the launch period itself. A lot of width and depth have been added both on analogue and DTH platforms. To start with we have three DTH platforms.

What is the channel ‘s potential in terms of viewership and advertising?

The potential of this channel from a viewership perspective is very high because I could be looking at an age group of 4- to 24-year-olds which will cover almost cover 30-35 per cent of the viewership base.

And from an advertiser’s perspective, we have just bought a gambit because we are going from boyhood kids category which is Rs 200-250 crore today to a youth segment which is Rs 500 crore. Thus, you see a lot of categories like telecom, automobile, mobile coming in. So we are looking at a very large advertising revenue base.

How are you gearing up on the marketing front?

In the next ten days we will come back to you with a marketing campaign and a digital campaign. We will leave no stone unturned with every single vehicle possible plus of course we will leverage our own platforms. The marketing budget would be around Rs 10-15 crore for the launch phase.

Any plans to go for HD?

We are not looking at HD right now. Animation is already created around the world. Whatever we have got is not new. We can do an HD version later on, but today the ambition is to the mass and it is very SD. But we need to be ahead of the curve, so we are looking at merchandising and app store. But these are baby steps that will fructify over a period of time.

Looking at your TG, which are the channels that you are competing with?

None! The TG is snacking. They once in a while go to MTV, Bindaas or zapak.com, but there is no single platform that talks about action and adventure. At an international level, Nick as a franchise has a couple of channels but that too not in the hardcore action adventure space. But Sonic has been created especially for India and has a capability of going international.

How much fresh programming will there be in a day?

There will be six hours of fresh programming in a day.

And what is the ratio of home grown vs international content currently?

‘Shaktiman’ is the only home grown content. The rest is either acquisitions or are sourced from the Viacom library.

Any targets set with the launch?

This is not a GEC, it’s about animation growing on the audiences. We are not a niche segment like MTV or Nick, but we are obviously looking at double-digit market share.