Piyush Pandey says the book should inspire a lot of creative people and also clients who stand to benefit from it. It will be produced in other Indian languages too 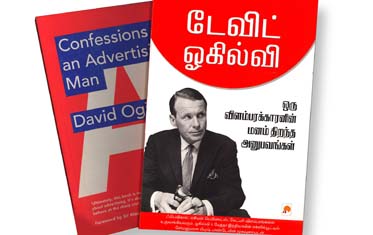 Piyush Pandey says the book should inspire a lot of creative people and also clients who stand to benefit from it. It will be produced in other Indian languages too

What’s uncool in Tamil Nadu? Eating with fork and spoon? English caller tunes? Being Tamil and not speaking Tamil? Or speaking only English? In fact, any Chennai-ite who speaks English – especially proper English – runs the risk of being labled ‘Peter’ – disparaging Tamlish for an English-speaking alien.

Wait a minute. Isn’t TN the most urbanised state in India with over 80 per cent literacy? It has the highest number of business enterprises and is home to automobile giants like Ashok Leyland, Ford, BMW, Hyundai. Chennai is the retail industry’s showcase city and an IT hub. And the locals don’t speak English?

No they don’t, says the Tamilian, in his careless Kolaveri accent, so what?

His legendary acumen in Maths/Engineering/Medicine now comes with a feisty pride in his identity. After all, the Chinese speak Chinese and the Germans speak German and the French speak French, so where is it written that Tamils – or for that matter all Indians – need to speak English to be successful?

That is why increasingly the Tamilian, lightyears away from the old derided Madrasi, is turning to the local language as the language of choice, and more significantly, the language of business.

And that is why Dakshin, Ogilvy and Mather’s specialist division to address southern consumers in their own idiom, decided to produce a Tamil translation of David Ogilvy’s ‘Confessions of an Advertising Man’. This timeless classic, as much a textbook on advertising as a riveting read, has been published in 14 languages worldwide. Tamil is a first for India. And it’s been released in David Ogilvy’s centenary year.

The book has been produced by the well-known southern publishing house, New Horizon Media, much admired for its “Kizhakku” imprint (get your tongue around the ‘zh’, should be easy after hearing every TV anchor talk about Kanimozhi 24x7/365).

Said Piyush Pandey, Executive Chairman and Creative Director, South Asia, Ogilvy & Mather India, in his foreword: “Confessions of an Advertising Man has been my advertising Bible, Ramayan and Koran for the last 30 years. I am delighted that it's now been adapted into Tamil. Apart from being a great guide on timeless advertising principles, the book has a lot of lessons for life in general.”

About Ogilvy, Pandey has written: “David Ogilvy was not just a creative genius, but an astute businessman who understood his clients' products and the minds and hearts of consumers. He was a great friend of Ogilvy India which has embraced and practised his principles through the decades and continues to do so. I am sure this book will inspire a lot of creative people and advertising people from other disciplines, along with numerous clients who stand to benefit from it.”

And after Tamil, O&M plans to produce translations in other Indian languages.