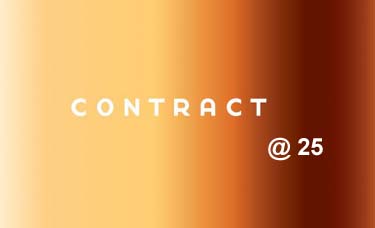 Contract Advertising took birth in 1986, more as a little cousin of JWT. For the quarter century since then, it has been a “rewarding and passionate” journey, as described by Ravi Deshpande, Chairman and Chief Creative Officer, Contract, and Michael Maedel, President, JWT, Asia Pacific & Middle East.

At that time, like any other new establishment, the agency’s efforts were directed at building itself up. While it kept a firm foot on the ground in the late 80s, the 90s were about being at the top of the game, winning Agency of the Year five times in that decade, scoring international awards and bagging new businesses. It was during this period that the turning point came for the agency with the addition of Philips to its roaster. The account not only brought the much needed creative credibility to the agency but also acted as a magnet to attract a host of other clients to its kitty.

Deshpande was probably the first musketeer who fleet-footed to Contract in its second year from O&M. At that time, as he recalls, the agency was still beefing up its operations. “It was just a startup and I was among the initial members of the agency.” But then, was it worth the risk to move to a startup from the biggest creative churner? “I was actually thrilled about the idea as I was not confined to rules. I was looking for a clean slate from where I would get the opportunity to script a new chapter,” he quips.

He was followed by Umesh Shrikhande, in the early 90s, to become the so-called second musketeer at the agency. Shrikhande, along with Deshpande, under the redoubtable Ram Sehgal, the man who built Contract from scratch, started setting new horizons. But soon after the agency began to enjoy the reputation of a “creatively stimulating thought shop” by the mid-90s, it suffered a major jolt. The prized Philips account slipped from the agency due to the formation of another big agency, Euro RSCG. The account shifted mainly because of an international alignment between the agency and the brand.

“But Contract has bounced back and flourished ever since,” says a beaming Deshpande. In less than ten years of its existence the agency had become a melting point of topnotch creative minds as well a star on the awards front, winning over 400 local awards along with a convincing performances at international festivals like Cannes, One Show and D&AD.  Some of its work on Cadbury's Milk Treat, Ayurvedic Concepts, Templeton and Temptations helped nurture the DNA of Contract as a nimble, sharp-thinking creative agency.

As Shrikhande chuckles, “Over these 25 years, the most exhilarating aspect has been the maturing of our relationships -- with clients, brands, associates and indeed with our own talented people. On the back of these strong equations we have been able to do persuasive and entertaining work that is almost always sound in thinking. Finally, more than anything else, that is what counts most in our trade.”

Then came 2000 and a slight rough patch for the agency. Not only did Deshpande and Shrikhande move out of the agency, it also witnessed the retirement of its founding president, Ram Sehgal. Also, at that point of time, the agency had to deal with the staggering issue of big-spending FMCG clients like P&G, Nestle, Kimberley-Clark not parking their creative duties to the agency, leading to a kind of road-block to its growth. This set industry tongues wagging about Contract's imminent fall!

It was damage control time. To get things moving again, Colvin J Harris was “imported” to the country from JWT’s Colombo office, to take charge as President of Contract Advertising. Interestingly, by that time, the agency had grown to 300 people. It had also laid the foundation of iContract, a one-to-one marketing arm focused on hybrid marketing including a mix of online and offline, and integrated with the events division. It also had its corporate ID and design shop named Design Sutra and a new upcoming division called Contract Healthcare.

Meanwhile, Michael Maedel had become the top voice of Contract in 2006. Reminiscing about the agency’s track record 25 years down the line, Maedel

says, “Contract achieved steady growth from day one. Within the first five years, it had already started partnering and building strong brands.  By the mid-90s, the agency had achieved full-blown stature on the back of big brand wins, superlative creative work that won many awards, and an intense people and training culture that built enormous talent. Contract was named the Agency of the Year three times during that period – a signal that it had truly arrived.”

This was soon followed by a homecoming for original musketeers Shrikhande and Deshpande in 2005 to put the agency back on track. Deshpande, who was invited back in the capacity of Chief Creative Officer couldn’t decline the offer. “I was moving out from Lemon. I was called to rewrite the success story at Contract and take the agency forward towards its new goals.”

He, along with Shrikhande, then Branch Head at Contract Mumbai, who went on to become CEO in 2008, coined the ‘grow young’ philosophy of the agency that emerged from the theory that new ideas reverse the ageing of brands. The fresh approach paid huge returns for brand Contract. As Deshpande says, “Indeed it has paid off. We’ve had some breakthrough solutions, such as ‘Start something new’ for Shopper’s Stop, ‘Khushiyon ki home delivery’ for Dominos, ‘Survive the world’ for American Tourister and so on. These are just a few examples of fresh, distinct and long-lasting ideas that Contract has generated based on this philosophy and the ‘unboxing’ methodology.”

Since then there has been no looking back. In fact, Contract has gone through the same crests and troughs that most other agencies go through -- consistently having to grapple with problems, always having one’s ear to the ground and one’s mind alert enough to know what new frontiers are being broken in the world of communication every day. Deshpande remarks, “In the last ten years we have been changing to accommodate the new environment of our new philosophy and the opportunities that new media gives us. We offer our clients multiple offerings right from core consulting to our Design Sutra specialist solutions. The best talent has worked in this agency, often going on to becoming extremely successful individuals. Through this journey, we have managed to keep the creative product consistently good, and this has worked in the marketplace for us. Cases in point are Shopper’s Stop, NIIT, Samsonite, Celebrations and Dominos, to name a few.

So, what has been the prime factor that has made Contract one of the top 10 agencies in the country? “One of the central reasons for Contract's growth, and stature, is the fact that it was never in the shadow of JWT. From day one it had an independent agenda as was intended, and over the years, everyone concerned with Contract's well-being have kept the faith and stayed on course with that agenda,” Deshpande says.

Maedel clarifies, “Having said that, the association with JWT has indeed helped -- not as a tag, but rather as a source of global knowledge and perspective. It has also added to Contract's competitive strengths.”

Both Maedel and Deshpande agree that Contract has never played second fiddle to the mammoth JWT. Deshpande says forthrightly, “Contract was a JWT agency only on paper when it was formed. We’ve always had our own identity and philosophy. We’ve never been a second agency, which is why we’ve succeeded. We competed against JWT head to head on several pitches over the years. We have our own methodology and our own point of view that have always made us one of the most admired agencies.”

Today, when the environment is more dynamic, and there is a creeping a sense of restlessness, alertness, eagerness to constantly innovate on newer platforms, Contract is not far behind. The agency is keeping an eagle eye on the digital front. “Digital is not just a new area but rather a new era that we have all stepped into. Quite clearly it needs a holistic and multi-pronged approach. So that's exactly what we're doing. We are constantly enhancing our knowledge through training, secondments, guest sessions, exposure sessions, sharing best practices and hiring people with digital strengths. We are simultaneously busy chiselling our skills by doing a lot of stuff. Through a combination of live brand projects and internal 'Let's make a difference' competitions, we have built an impressive body of work. Finally, through seamlessly integrated structures, processes and by prioritising digital in the very early stages of campaign development, we are adding flair and attitude to our digital thinking,” observes Shrikhande.

This year has been quite a satisfying year for the agency with the addition of a new client almost every month like HSIL, Google, moneycontrol, Ashok Leyland, Piramal Realty, Corelle Kitchenware, and Cavinkare’s Chik. The agency attributes this success to the ability to give interesting solutions to clients during pitches.

After an immensely gratifying journey of 25 years, what is that one ultimate goalpost for the agency? Shrikhande gets reflective on this. “It is difficult to have an 'ultimate' goal for any organization, more so when you are in the dynamic and vibrant business of ideas. What we like to preoccupy ourselves with -- more than a goal -- is the direction in which we are headed. In a tireless and relentless fashion, we keep asking cardinal questions and then get busy creating and finding answers that are evolved yet interesting. Questions such as 'how can we add more and more magic to our relationships?', 'how do we broaden and deepen our ideas culture?' and 'how do we ensure that Contract remains the best place to work in -- which it is?”