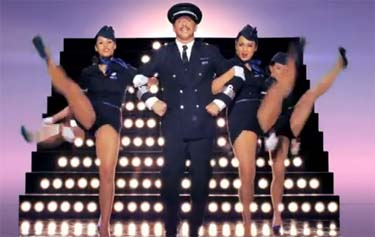 To celebrate the launch of IndiGo airline’s new international operations, its creative agency Wieden+Kennedy has launched a new TV commercial based on the Runway Musical style. A combination of combination of theatre and tarmac, the TVC draws parallels between the airline’s operations and the minutely-choreographed perfection of a musical.

The film shows core members of the IndiGo team including co-pilots, ground personnel, cabin crew along with a Captain dancing to the tunes of the company's efficient operations.

Speaking about the commercial, Aditya Ghosh, President, IndiGo, said, “These are exciting times not only for us but for all avid travellers. Our all-new lively advertisement not only celebrates the milestone of us going international but also reiterates our promise of providing a hassle-free and on-time travel experience to our customers. It’s the strong force of our staff/crew members and the belief of our customers that keeps us going and this is clearly reflected in the fun-filled moments showcased in the commercial.”

The TVC has been shot with an all-star crew in Los Angeles under the direction of Steven Antin, director of the Christina Aguilera musical feature ‘Burlesque’, and choreographed by Denise Faye of ‘Chicago’ fame.

Talking about the photogenic combination of theatre and tarmac, Mohit Dhar Jayal, Managing Directo, W+K, said, "Every aspect of the IndiGo experience is designed to maximise customer satisfaction, and IndiGo's advertising is no different. Marketing propaganda just isn't IndiGo's style, which is why this film is such a great piece of entertainment."