Conceptualised by O&M, Adani Wilmar has rolled out a major blitz across channels with the emotive 75-second commercial 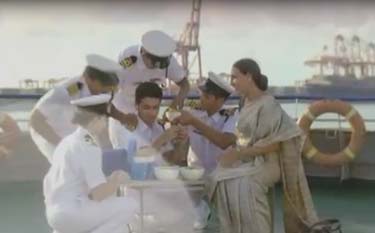 Conceptualised by O&M, Adani Wilmar has rolled out a major blitz across channels with the emotive 75-second commercial

Fortune, the flagship brand of Adani Wilmar, yesterday launched its latest television campaign ‘Har Maa ke dil mein’. Rooted in the philosophy that there is no greater joy than the joy of eating home cooked meals, brand Fortune is built around the emotion of families coming together and enjoying great food. The ‘Har Maa ke dil mein’ TV commercial, developed by the Fortune’s marketing team along with Ogilvy & Mather, takes this thought forward by leveraging the twin emotions of the unmatched taste of mother’s cooking and the lengths to which a mother will go to provide her child with nutritious food.

The TVC revolves around the concept of families bonding over great food together. The film narrates the charming story of a mother, who goes to extraordinary lengths to take home cooked food for her son in the Navy who is unable to come home on his birthday. An interesting touch is the use of an evergreen SD Burman track from the fifties that aptly complements the mood of the film.

For the first time in the edible oil industry, a 75-second TVC has been made, and that dramatises the impact of the story. The film is directed by Manoj Pillai, and is produced by Thinkpot Productions.

Angshu Mallick, COO, Adani Wilmar, commented, “Fortune’s effort is always to own the mother’s heart, because when it comes to her child, it’s always the heart that wins over the head. All mothers love cooking for their children and providing them with delicious home cooked food; this thought forms the core of our communication strategy. The TVC reinforces Fortune’s brand message to both our existing and prospective consumers.”

Speaking on the campaign, Piyush Pandey, Executive Chairman & Creative Director, South Asia, Ogilvy & Mather, said, "Fortune is a market leader which needs to drive the brand as well as the category. The category is food, which is the basic essential in everyone's life, and the basic driver of emotions in any family. The film captures the emotion that in the eyes of a mother, a child always remains a child, no matter how old he or she is. A mother's first need is to feed her child in a delightful fashion, and Fortune is her assistant in making that happen.”

He added, “We have used SD Burman's song ‘Meri Duniya hai Maa...’ as perhaps the most perfect ode to a mother. I am delighted with the film, which I think will touch a chord with every member of every family." The campaign will be a high impact blitz, with over 5,000 spots (average 40 seconds each) across 20 channels, including Star Plus, Star Pravah and Star Jalsha (the first commercial break of all serials in the evening to be exclusively Fortune 75-seconder ad). Other strong properties like cricket on Neo Cricket are also part of the deal.  Complementing TV, there will also be a heavy Internet campaign with over ten million impressions in digital media; outdoor campaign in metro cities; and a radio campaign spanning 40 locations. The campaign will also feature on over 2,000 digital cinema screens across the country and on DTH channels of various providers.