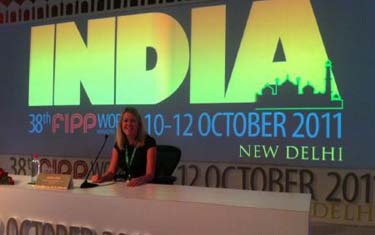 The mood at the first day of the opening session of the 38th FIPP World Magazine Congress at New Delhi was quite cheerful. As on the previous night, the audiences witnessed the performance of Bollywood Actor Shah Rukh Khan dancing to the tunes of ‘Chamak Challo’ from his upcoming movie Ra.One, along with the comparison of his love for magazines to ‘Samantha Fox’ on the cover!

On October 11, 2011, the event began with an opening remarks addressed by Aroon Purie, CEO, India Today Group along with Ambika Soni, Minister of Information & Broadcasting.

While Purie welcomed the cheerful crowd as he said, “We again give you a warm welcome as it’s a matter of pride that first time World Magazine Congress is happening in Delhi”. He further shared about his first experience of the congress in 2000 at Paris, when the Indian Media was not opened up tothe world.

Furthermore he also threw a quick light to various insightful facts about India wherein he mentioned that there are around 10500 newspapers and 58100 magazines registered in the country. To this count, the no. of TVchannels stands at 550 with another 250 channels to be launched.

He cited further, that in a city like Delhi an average user has the option of 6 English Newspapers and 10 Hindi newspapers being delivered at his doorstep, and with 22 official languages this leaves more scope for the publishers to venture into various markets.

On the social media front he said, “India has 31 million registered face book users in the country, making it the third largest market.”

Another interesting point made by him that India being avast country with diverse backgrounds wherein bullocks carts straddle along a Bentley on the same roads and so is the case with Media wherein the traditional mediums are growing in pace with the digital medium.

He also laid emphasis on the mobile platform especially with the Mobile phones subscriber reaching to 850 million and the base growing at a speed of 10 million additions in a month. However currently, Smartphone’s constitute meager 5-6% to this growth but by 2015 it is expected to contribute by 25%.

Even the advertising in magazines will grow at a CAGR of 13%in next five years.

As his concluding remarks he said that one-size-fit approach do not work really in the magazine business as the publishers should look for new models to keep growing in this space.

Thus he gave a 360 degree perspective on the magazine industryin sync with this year’s theme of this congress.

As she elaborated on the presence of 77,000 registered publications in the country with India contributing to 31% of the global advertising and registering a growth of 67% in this segment.

She also stated that today the picture is quite optimistic as innovation; adaptation and expansion remain the three key points in the publishing industry.

Soni also talked about the steps initiated by government for the segment including the considerationof requests of the magazine industry for police verification for new titles andmore DAVP advertisements to magazines.

She concluded the session by expressing her love for the print format of magazines, to an ‘unmatched experience’.