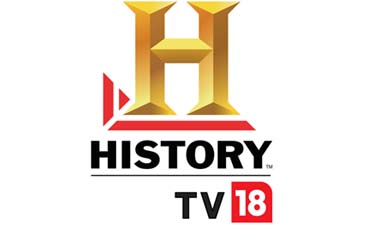 History is the first in a bouquet of factual entertainment channels to be launched by the joint venture. The channel is available in six languages (English, Hindi, Tamil, Telugu, Bengali and Marathi) in full HD across all major markets in India and will reach out to more than 50 million households in the launch phase itself. It will be available across leading cable TV platforms such as Hathway Cable, In Cable, Den Networks and leading DTH platforms such as Tata Sky and Dish TV as well as other independent analogue and digital platforms.

The channel has signed on actor Salman Khan as the face of the channel in an attempt to broadbase the appeal of History and the factual entertainment genre.

As part of the launch promotion, History took over televisions as 12 channels like CNN IBN, CNBC TV18, MTV, Nick, VH1, IBN 7, Movies Now, Zee Bangla, Zee 24 Taas, Zee 24 Ghanta, Eanadu TV) will air the same content in a special 2-minute ‘roadblock’. Salman Khan will be introducing the History channel and all that it represents to Indian audiences.

In terms of outdoor/out of home advertising, innovative formats where the content seems to ‘come alive’ and appear real will give passersby a first-hand taste of what History is all about. Some examples of the engaging OOH innovations are the ‘Ice Road Trucker’ bridge replicated on a foot overbridge;  ‘Sliced’, where the anchor actually seems to ‘slice’  the hoarding; ‘Swamp People’, which has a brilliant life-like cutout of a crocodile; and ‘Top Shot’ which shows smoke actually coming out of a gun as part of a hoarding.

Worldwide, the factual entertainment genre has undergone a transformation with greater emphasis on creating fact-based entertainment, thrill and action formats that appeal to a much wider audience. History has led this transformation in formats and content worldwide and the channel has reaped rich rewards by moving to the pole position in ratings and popularity, ahead of channels like Discovery and NatGeo etc in the US and some other markets across the globe.

History in India will aim to emulate this performance. The channel’s promise – ‘History Made Every Day’ – captures the spirit of a new programming paradigm to be introduced for the first time in India.

Speaking on the launch, Abbe Raven, President & CEO, A+E Networks, said, “We have eagerly waited for the launch of History in India, a market that represents important growth opportunities for A+E Networks’ global strategy. Since 1995, History has been entertaining viewers around the world with its innovative and original programming, becoming the leading destination for factual entertainment. We are excited to partner with TV18 to bring History to audiences in India, and believe the channel will be as successful here as it is in the US and other territories.”

Sean Cohan, VP International, A+E Networks, said, “India is a critically important market for us, and we are thrilled to be launching History in partnership with TV18. Under Ajay Chacko’s leadership we have built a strong, talented team at A+E Networks l TV18 across programming, marketing, digital and operations.  With their combined expertise I have no doubt History will be an impact player from launch.”

Haresh Chawla, Group CEO, Network18, said, “We believe that the Indian market is ripe for alternative formats and that is one of the reasons for us to bring in channels like History into this market.  Factual entertainment is emerging as the new preferred choice across the world and the genre has the potential to become mainstream in India as well. We are confident that History, the first product from our partnership with A+E Networks, will widen the appeal of the genre and pave the way for many more initiatives in this space.”

Ajay Chacko, President, A+E Networks I TV18, commented, “History’s show selection and content mix are based on exhaustive studies, content testing and feedback with a variety of audiences. History Made Every Day, the channel’s position, encompasses the breadth of content and themes that the channel brings to Indian audiences. History here is not just about the past, it’s as much about people making history today. We also hope to be able to play a pivotal role in the growth of this genre in India.”