Star Plus declared Entertainer of the year at Consumer Awards 2011 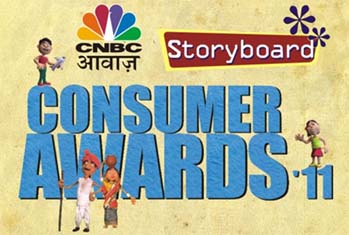 Star Plus declared Entertainer of the year at Consumer Awards 2011

CNBC AWAAZ felicitated the winners of the seventh edition of ‘Consumer Awards’ yesterday at a gala in Mumbai. ‘Storyboard’, a programme that deciphers and analyses the marketing functions of brands and observes closely their businesses has come together with ‘CNBC AWAAZ Consumer Awards’, that identifies & felicitates the best performing brands across categories.

CNBC AWAAZ Storyboard Consumer Awards 2011 has set new benchmarks for brands across India by bringing together consumer recommendations and expert opinions under one forum and identifying brands that have excelled in both the spheres. The first year of this marriage has seen a host of new categories, more analysis and deeper insights. Prithviraj Chavan, Chief Minister, Maharashtra was the Chief Guest at the awards ceremony who felicitated ‘India’s Most Recommended Brands’  & ‘The Best Marketing Campaigns’.

The CNBC AWAAZ Storyboard Consumer Awards primarily had three main award categories: Awards by Popular Choice which explored consumer recommendations, the Awards by Jury & the Special Commendation Awards which identified the best marketing or brand initiatives of the year.

The ‘Awards by Popular Choice’ was based on an exhaustive consumer survey which was conducted with over 5500 respondents across six centres by The Nielsen Company. The research conducted evaluated brands on consumer emotions rather than just their behaviour. It also explored the success of various marketing initiatives undertaken by these brands. The aim of the research was to discover the drivers and motivators of different brands; recognize their best marketing initiatives and decipher the consumer behaviour behind the most recommended choice of brands. In short, select the most recommended brand rather than just a preferred choice amongst the consumers.

CNBC AWAAZ Storyboard Consumer Awards 2011 explored different brands that managed to find a flavour with the Indian consumers even as they tightened their purse strings and those that have delivered true value for money. The event witnessed a panel discussion with luminaries such as Nitin Paranjpe, MD & CEO, Hindustan Unilever Ltd., Pradip Chaudhuri, Chairman, State Bank of India, Anand Kripalu, MD, Cadbury India and Kishore Biyani, CEO, Future Group who discussed the topic ‘Globalizing Brand India and building Global Brands’ which was moderated by Sanjay Pugalia, Editor-in-Chief, CNBC AWAAZ.

Speaking on this occasion, Sanjay Pugalia, Editor-in-Chief, CNBC AWAAZ said, “India has evolved as world's most dynamic market with respect to emerging trends in consumer behaviour and its advertising and marketing landscape. It is amazing to see the phenomenal growth in the number of brand categories and trends over the last seven years. CNBC AWAAZ Storyboard Consumer Awards 2011 is India’s most holistic platform that identifies and celebrates visionary brands that have reached out to their consumers and managed to make a mark in one of the world's most sought-after markets. These brands have broken the barriers of language and nationality, rising up to the coveted position of India's most recommended brands. Setting new benchmarks, CNBC AWAAZ Storyboard Consumer Awards have transcended into a commendable initiative saluting the Indian brands and the people behind them that millions of Indians have chosen to buy, to try, to experience and to own.”

The winners of CNBC AWAAZ Storyboard Consumer Awards 2011 are as stated below:-