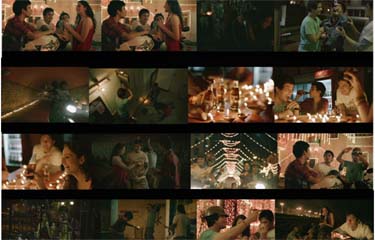 Celebrating the joy of sharing and spreading happiness, Coca-Cola has launched its new integrated communication initiative – “Khushiyan Baatne Se Hi Badhti Hain”, this Diwali. The campaign builds on the values of inclusivity, spreading and extending happiness that India as a society revels in and something that brand Coca-Cola has always been a proponent of. The theme of the Diwali campaign is that ‘Happiness just becomes bigger when you extend it to others, making the sphere of happiness larger and it lights up everything around you.’

The 2 week long consumer promotion will be promoted through a TVC featuring Shah Rukh Khan who will invite the consumers to participate in the promotion. In –addition, the contest will also be promoted through the use of Digital Medium including  Mobile and banner applications which will reach out to close to 50 million consumers and ask them to share who will they light 2 diyas for this Diwali and win an opportunity to meet the superstar, Shah Rukh Khan.

The Coca-Cola Television Campaign for Diwali portrays how a group of friends set out to brighten up spaces that are most dear to them with diyas, thereby spreading happiness.  The movement to spread the happiness is contributed by each of the friends lighting diyas in memory of special moment in a particular place like their classroom, the girl’s hostel watchman, canteen table etc. The soulful background score further adds to the positivity and celebratory spirit.

To further amplify the campaign, Coca-Cola has tied up with Ra.One trough an interesting consumer promotion where consumers are invited to call (0) 80009 80009 and respond to the question - Who will you light 2 diyas for, this Diwali? through an Interactive Voice Response System (IVRS). 25 Lucky respondents chosen through a computer generated luck draw will win a chance to meet, the leading star of Ra.One, Shah Rukh Khan.

According to Anupama Ahluwalia, VP – Marketing, Coca-Cola India and South West Asia, “Coca-Cola, the universal icon of Happiness, believes that Happiness becomes much bigger when you share it with others. We have built our Diwali campaign based on this simple proposition. Just as Diwali marks a new beginning and brings on the celebratory mood, it also gives us a good reason to undertake a little act of digging into our own happiness and sharing it with others, in turn making the moment even more special.  What better way to symbolize this act but by lighting ‘Diyas’. By taking two extra diyas – taking a bit of your happiness and lighting it for somebody else or at someplace else, we believe will serve as happiness multiplier. We are confident that this new communication will strike a chord with the Coca-Cola consumers and serve as a catalyst in making their Diwali a little more special and memorable. This Diwali, we urge all Indians to include others in their happiness, go ahead light two more diyas for someone else”.

Speaking about the latest initiative, Prasoon Joshi, Executive Chairman McCann Worldgroup India, Regional Creative Director Asia Pacific McCann Worldgroup said, “Working on this particular campaign has been a very fulfilling experience. The McCann and Equinox team has turned this campaign around in record time.  What makes this campaign unique is that it is only Coke who can speak such a heartwarming language and talk about extending happiness in such a simple yet special manner. The thought of amplifying one’s happiness by including much more than the obvious. How often in our fast paced life, do we take a step back and think about the small things that add immense meaning to our lives ; about those people who play small but endearing roles in our everyday life.? Sometimes, a little detour into the simple lanes of life makes it special. The Coca-Cola ‘Khushiyaan Baantne Se Hi Badhti Hain’ campaign echoes the same sentiment and encourages everyone to make this Diwali more special and memorable by undertaking the simple act of lighting two diyas for someone/ someplace else thus extending happiness and spreading joy”.