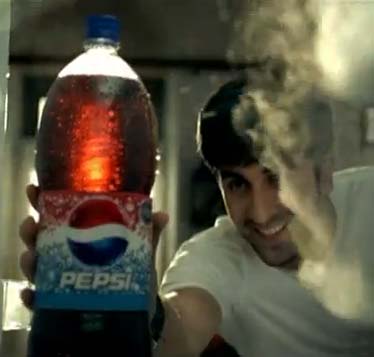 Always thought you have it in you to be a Crorepati? Dreamt of fast-tracking the journey by participating in Kaun Banega Crorepati (KBC) and being on the hot seat? Now is the time to realise your dream and the route could be shorter than you ever imagined; you need to answer only one question... Yes, one right answer and the big prize can be yours with ‘Pepsi Ek Crore Ka Shortcut’.

Youngistaan’s rock-star, Ranbir Kapoor reveals this ‘Pepsi Ek Crore Ka Shortcut’ in a brand new TVC where he stars along his father, Rishi Kapoor for the first time. Directed by Ayan Mukherjee of ‘Wake Up Sid’ fame, the new commercial presents Ranbir as a laidback yet confident youngster who listens to his parents but has a mind of his own. Rishi plays a concerned father who wants his son to follow his footsteps and work hard if he wants to be a Crorepati. His son however has a shortcut to Rupees One Crore that goes through the fridge.

To stand a chance to win a Crore Rupees, you also just have to walk up to the fridge and grab that large KBC special Pepsi bottle; look behind the label for a simple multiple choice question and SMS the right answer with the unique code to 9718852525. The winner of Pepsi Ek Crore Ka Shortcut will be announced on November 16 in a special episode of Kaun Banega Crorepation Sony TV. The fun doesn’t stop here; every day three people can win a gold coin each and twelve can win silver coins. You can also win a chance to watchKaun Banega Crorepati live in Mumbai.

Speaking about the new initiative, Sandeep Singh Arora, Executive Vice President - Marketing, Cola, PepsiCo India said, “Pepsi is a brand that stands for the youth, it stands for those who want to change the game in their lives; and with ‘Ek Crore Ka Shortcut’ we present an unmatched opportunity to realize their dreams. For the first time Kaun Banega Crorepati and Pepsi present an opportunity to win a Crore Rupees without sitting in the hot seat. What makes it even more exciting is the coming together of Ranbir and Rishi Kapoor for the first time on-screen for the campaign”.

“I am delighted to share the screen with my son for the first time for Pepsi’s new campaign. I like the chemistry between a father and his son that we have tried to present in the TVC. The father is trying to tell his son in his own way that he had to work really hard to become what he is today. He wants his son also to become a hard working man. But youngsters are quite smart today and in the end, the son strikes gold with a Pepsi bottle and Ek Crore Ka Shortcut”, said, Rishi Kapoor.

“Pepsi’s new campaign showcases the smart, witty and with-it youngsters today who are aware of the world and have a can do attitude. They may take a few things easy but that doesn’t mean they don’t have things figured out; they have their own shortcuts that lead to a win-win solution. ‘Pepsi Ek Crore Ka Shortcut’ is just that… a fun and fast way to get a chance to win a grand prize without doing anything wrong. The campaign is engaging and it pairs me with my favourite actor, my father for the first time.  It was a wonderful experience shooting for the campaign and I hope the audience likes it”, said,Ranbir Kapoor.

“Pepsi has always been the voice of the youth and our latest campaign continues to reflect that. The TVC showcases the friendly banter between a father-son duo; and we are thrilled to have Rishi Kapoor and Ranbir Kapoor bringing their real life chemistry on screen for the first time. The whole concept of Pepsi and Kaun Banega Crorepati coming together and offering a shortcut chance to win a big amount is game changing; and with the two Kapoors on board, we have an equally exciting and entertaining TVC”, said,Saurabh Saksena, Executive Business Director – JWT India.

Making of the TVC:

Director of the film: Ayan Mukherjee