Innocean Worldwide has developed an entire communication package to attract premium car buyers with a passion for life. 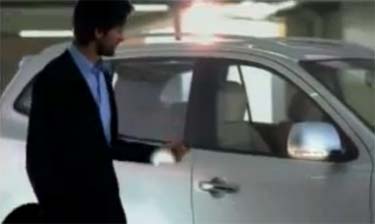 Innocean Worldwide has developed an entire communication package to attract premium car buyers with a passion for life.

Competition is set to become fiercer in the SUV segment with the commencement of assembly of Hyundai’s Santa Fe at the automobile major’s Chennai plant. Hyundai’s creative agency Innocean Worldwide has developed an entire communication package to snare the premium car buyers.

Santa Fe was launched in the fall of 2010. Offered as a CBU (completely built unit) in the Indian market and riding on the success in the US, Australian and New Zealand markets, the demand and bookings for the SUV has outstripped supply in a few weeks since the launch. Initially there was a limited media presence, but with local assembly going on stream by mid-2011, it is all systems go for Hyundai.

George Koshy, Senior Creative Director at Innocean, said, “The brand is positioned as a well-endowed, feature-packed sturdy crossover for alpha corporate achievers in the 35 years plus age group. It takes the rough and the smooth with equal ease and with definitive levels of luxury. Hence, the brand’s tagline ‘Born of Luxury.’ The commercial that has just gone on air represents a unique take on this segment’s buyers.”

Koshy further explained, “In the campaign we see a CEO with an interesting aside to his personality -- apart from his day job as a corporate chieftain he has a passion for art. The entire TVC is in an interesting setting of the protagonist’s art show where an admirer inquires about his inspiration.”

A series of deft brush strokes and their interplay with the Santa Fe’s driving prowess brings out the hidden inspiration for the masterpiece on display. The commercial went on air from August 25, 2011.

Elaborating on the strategic constructs, Vivek Srivastava, Joint Managing Director of Innocean, said, “We have gone away from the standard grain of the protagonist being a work obsessed maniac to that of a self-actualised existence which values talent beyond work place rules and dynamics. Our research revealed this strong trait among emerging leaders, that they have a diversified set of passions to maintain balance in life.”

Commenting on the media strategy, B Sridhar, Group Director, Media & Digital Services at Innocean, hinted at a TV spend of around $ 1.5 million. “The channels chosen for this brand are high affinity genres like business news, general news and lifestyle. Additionally, print and outdoor ads at premium locations play a supporting role.”

Waiting in the wings is a full digital onslaught as well as a strong ride in the social media platforms.