The tally: 41 metals and a Grand Prix. Leading admen BestMediaInfo spoke to feel that Indian creativity is finally getting noticed internationally 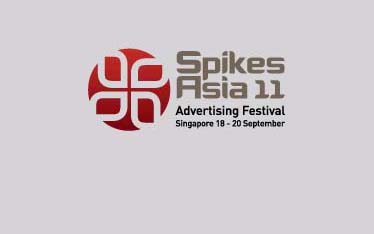 The tally: 41 metals and a Grand Prix. Leading admen BestMediaInfo spoke to feel that Indian creativity is finally getting noticed internationally

The grand finale of Spikes Asia 2011 held in Singapore on Tuesday night was a time for celebrations for Indian advertising. The Indian kitty was an impressive 41 metals. Besides the tally, Mudra Communications, Mumbai filled third into the space of ‘Agency of the Year’ with Creativeland Asia awarded as ‘The inaugural Independent Agency ofthe Year’.

BBDO India came back with the maximum number of awards, 11 to be precise, for its campaigns like ‘ShaveSutra Gillette Max3 Turbo Sensitive’ and ‘Terrorism, Nuclear, Sea Level campaign for White Collar Hippies’. Mudra had the next largest tally of 10 metals. The agency’s ‘Silent National Anthem’ campaign for BIG Cinema and ‘Disappearing Discounts’ campaign  for RI Ayurveda Research Labs bagged 3 bronze each, while it got 4 silver metals for the campaigns ‘Torture Room’, ‘Bedroom’, ‘LockerRoom’ for Stedfast and ‘Bizarre Laws’ for Facse.

JWT and Ogilvy came in next with 4 awards each – 3 bronze and a gold for JWT and 3 silver and a bronze for Ogilvy. The winning campaigns from JWT included ‘Belle De Jour for’ and ‘Naaka Mukka, Now in English’ for The Times of India and ‘Endless Goodbye for Bharti Airtel.

Ogilvy’s win was led by ‘Train for Government of India’ for Ministry of Railways and ‘Guillotine’, along with the ‘Gun’ and ‘Snake’ campaigns for Perfetti Van Melle.

However, the show stealer was the Media Grand Prix awarded to Creativeland Asia for its campaign ‘3D Experience’ for Audi India. The agency also bagged a bronze Spike for ‘PLAN-T’ campaign for Hippo Baked Munchies in the digital category.

TBWA’s ‘Immigration stamps’ for Yatra.com picked up 2 metals including a bronze and silver Spike in the design category. And Mediacom’s ‘Unlearning to Educate shiksha’ and ‘Vicks CJ Hunt’ for P&G grabbed a silver and bronze each.

BestMediaInfo.com spoke to some of the top honchos of Indian advertising to find out how they see the Indian performance at Spikes Asia 2011.

Josy Paul, Chairman & Chief Creative Officer, BBDO/Proximity India: “We thank the jury at Spikes Asia for the awards and invite them to our ashram in Mumbai for a simple meal. It feels good to be No.1 for the moment. We owe it all to our clients and their belief in ‘creating acts, not ads’. We will continue to light incense sticks and candles at our ashram even as we contribute to finding ideas that engage and entertain our client’s audiences. It's been India's best performance so far. Almost all the agencies in India have been shortlisted and have won metals. The work covers diverse categories, and many of the campaigns have made a measurable difference to their brands. India is up there, right on top, in Asia. Our only weakness is still digital.

Colvyn Harris, CEO, JWT India: "Overall, Asia Pacific has done very well at Spikes Asia. JWT India has won lot of metals. I am very excited about this win. If we compare Spikes with last year, India has performed better this time."

Sajan Raj Kurup, Founder & Creative Chairman, Creativeland Asia: “In India we are the first agency to become Independent Agency of the year. It’s a huge moment of delight for us winning the Grand Prix. Creativeland Asia has done consistently well. On the general industry perspective, this year Spikes Asia was as good as any year. There wasn’t much difference compared to last year.”

Abhijit Awasthi, National Creative Director, O&M: “We are happy to win silver and bronze metal at Spikes Asia.  It is a pleasure to know that brands we handle are getting recognised internationally. Spikes is gaining stature with more speakers, more knowledgeable forums every year.”

Santosh Padhi, Chief Creative Officer & Co-founder, Taproot India: “We won a Bronze Visual Classified for Times of India in the Print category, although we were expecting some more metals. Also, overall I feel that last year was better in terms of quality but then it all depends upon the jury as every year it keeps on changing. However, this year I have really liked the ‘Samsonite’ campaign by JWT China along with ‘ShaveSutra’ campaign for Gillette and ‘Silent National Anthem’ for BIG Cinemas.”

Pratap Bose, COO, Mudra Group & CEO, Mudra Max: “It is an indication of Mudra’s creative strength. This also comes from the fact that we are the No.3 agency in Asia. But the win came as a huge, pleasant surprise to us and now, this has set the bar even higher for us. I believe that the Indian advertising industry is making the right noises and people are watching us all over the world. With these wins, all in all, the creative fraternity has been noticed and has also managed to raise some eyebrows.”