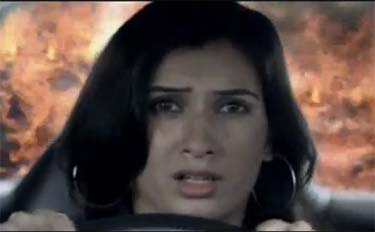 The campaign seeks to establish the “Speed” credentials and product superiority of Reliance Netconnect’s latest Hi-speed wireless Internet product in a very edgy, exhilarating and engaging way.   The campaign reiterates the fact of being the fastest wireless broadband in the country with speed up to 28mbps.

Shot & post produced internationally, the Reliance Netconnect TVC focuses on the thrill, adventure and most importantly the speed of Reliance Netconnect. All the three action packed films in the campaign were weaved with the intention of testing real users thrown into extraordinary circumstances where a difference of a second decided life or death. Whether it’s the girl stuck in a flaming car, the college kid facing a wild elephant in the jungles or the boy tied up as a train charges towards him, drama, tension, excitement and the speed of the Reliance Netconnect dongle are the key ingredients in all.

Sanjay Behl, Group Head- Brand & Marketing, Reliance Communications said, “With our world-class network quality and wireless data penetration in over 1000 towns, we are confident of delivering the fastest Wireless Broadband speed in the country, tested at levels of upto 28 MBPS, powered by the superior MIMO Technology. The ad campaign demonstrates that Reliance Netconnect's GSM and CDMA wireless data product range delivers the best broadband speeds in over 1000 towns across the country, thereby resulting in a delightful customer experience"

The films have been produced by Biscuit Films & directed by renowned Hollywood director John Bonito and shot and post-produced entirely at International locations.

Jishnu Sen, CEO, Grey Worldwide added,  “Everybody in this new changing India is working with the realization that there are more opportunities and horizons to discover around the corner. They need to devise smart cuts in life to reach their goals faster. So they can’t live life by ‘buffering’… they need to SPEED UP to succeed. It’s Fast. Are You? Is a fitting summation of this attitude.

The campaign designed around speed tests was a completely novel way of bringing alive the super speeds of Reliance Netconnect. The life and death situations showcased in the campaign require both Netconnect and the user to act really fast.”

Executive Creative Directors of Grey Mumbai Rohit Malkani and Karan Rawat expressed their excitement about the new set of films - “The process actually began more than two months ago, when we cracked these scripts. Speed has been communicated in this category in a zillion ways and finding a new way was the toughest part. We had to deliver the speed promise yet stick with our ‘demonstrably superior’ positioning. After some serious brainstorming, the team came up with ‘It’s fast. Are you?’

“We knew we were on to something exciting, fresh and break through the moment we had penned the script.”, they added.

“Searching for the right director took us almost a month, till we narrowed down on L.A based John Bonito. It’s been a whirlwind yet thoroughly enjoyable experience and a true team effort. The result is 45 seconds of action packed; nail biting drama with a rush that can leave you panting. The films have kept us on the edge of our seats for the last two months, it’s now time for our consumers.”

Talking about the new communication campaign, Amit Akali, National Creative Director, Grey India said, “These Reliance Netconnect films certainly aren’t in a typical advertising format. They’re different from what you expect to see in an ad film. They test the viewer, make him think a little bit as to what actually happened, how the protagonist actually escaped, maybe even think about what they would have done in a situation like that.”

The campaign is in line with Reliance Communications’ “Wirefree India” vision, which it has set to trigger its march towards a dominant leadership position for its latest superfast Netconnect broadband.