Country Head Salil Tandon & Executive Editor Puja Sethi share how the international model has made inroads into the less travelled route in India. 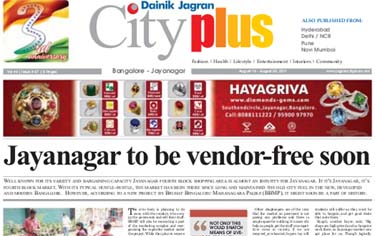 Country Head Salil Tandon & Executive Editor Puja Sethi share how the international model has made inroads into the less travelled route in India.

Community newspapers focusing specifically on the news pertaining to a specific locality or community have always been an area of interest of publication houses in India. Ironically, there have been several local and small players in various markets that have made failed attempts to establish themselves as community newspapers settling nothing but as periodical classifieds.

Interestingly the picture in the global markets is just reverse as the concept has been an important part of daily lives of other countries. But in India, it is still in its nascent stage. As the numbers indicate that in United States, about 97% of newspapers are classified as "community" newspapers, with circulations below 50,000. Their combined circulation, nearly 109 million, is triple that of the combined circulation of the country's large daily newspapers.

Dainik Jagran brought the community newspaper concept in India four years back and launched compact size weekly newspaper Jagran CityPlus. The whole concept has nurtured and flourished under the leadership of Salil Tandon, Country Head, Jagran CityPlus. The newspaper has independent editorial team headed by Executive Editor Puja Sethi. BestMediaInfo.com spoke to both to dig out more on the business model which took the newspaper from four editions to 32 editions in a short span of time.

Headed by Puja Sethi, CityPlus has a dedicated team of field reporters and editors for every edition. Describing the editorial focus of the English Information-Entertainment based weekly compact paper, Puja says, “Our content is focused towards life and lifestyle on a more local and sub-local level. There are localized Community news, Events and Happenings with the features focusing on lifestyle. The paper has news based on customized information and inputs on a local level making it more relevant to the individual reader.”

The strength and success of CityPlus lies in targeting and selecting the SEC A+, A and B households for circulation. Tandon cites as he says, “The process is long and tough but the overall database is our core property. The data does not only help the newspaper to reach the right TG but it also ensures high cost effective advertising as there is no wastage. Due to the huge database, we provide the unique opportunity of sampling to the FMCG clients among their target customers. We have plans to exploit this database in near future which may include several consumer research activities.”

Being a free community newspaper, CityPlus is completely dependent on the ad revenue. The paper serves as cost effective medium for local advertisers in terms of response driven advertising and efficient sampling tool for the national campaigners in a focused manner. According to Tandon, “The advertisers range from home decors, professional institutes, high profile salons, hotels, hospitals, multi-national showrooms etc. The advantage to the advertisers lies in the fact that they get pin-pointed audience and value for their money, benefitting the readers also out of it.”

The ad rates vary between Rs.70-90 per column centimeter which is in the reach of the small local advertisers. The average ratio of advertisements and editorial remains around 50:50.

The newspaper has shown its impact on several local community level issues besides awakening the readers and local authorities. Sharing some examples of the impact of the paper, Puja recalls, “From repairing of the roads to filling path holes and solving water and electricity problems, CityPlus has been getting several credits to become a useful newspaper for its readers.”

CityPlus also organizes events at community level in its areas. The events help people to bring their problems in front of the local authorities and get their solutions. Going forward, CityPlus aims to hold such events in every locality on quarterly basis.

Specially, CityPlus targets a younger and more urban demographic profile of readers. It aims at reaching out to the web friendly population though interactive sections of blogging on its website. The newspaper has recently introduced its epaper version also.

Tandon concludes with the future plans of CityPlus, “We have plans to launch about a dozen of editions this fiscal. Our aim is to cover all Tier 1 and Tier 2 cities across the country while maintaining the high revenue growth.”