COLORS forays into the historical genre with Veer Shivaji 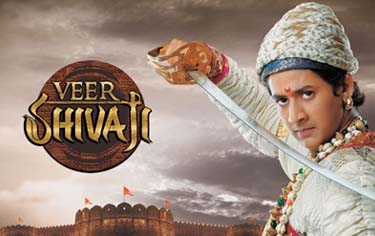 COLORS forays into the historical genre with Veer Shivaji

Continuing with its philosophy of presenting path-breaking concepts, COLORS is proud to showcase, for the first time on Hindi General Entertainment television, a historic magnum opus – “Veer Shivaji”. The period drama, produced by Contiloe Telefilms, narrates the three-hundred year-old story of the revolutionary warrior king ‘Shivaji’ and brings forth to the audiences the lesser known facts and achievements he made during his lifetime. Besides narrating uncharted incidents from his life, the show highlights the relationship between mother-son Jijabai and Shivaji that became an integral part of Shivaji's fight for Swarajya. The show also takes audiences through Shivaji Bhonsle’s life right from adolescence to his glorious rise as a leader which led him being rechristened as Chhatrapati Shivaji Maharaj. Veer Shivaji premieres on September 2, 2011, and will be telecast every Fridays and Saturdays at 8.30 pm.

Talking on the launch of the show, Ashvini Yardi, Head of Programming COLORS says, Great warriors go down in history because of the legacy they leave behind. Veer Shivaji chronicles the making of the legend Shivaji, his growing years, how he was mentored to take on as a warrior king. We will explore the uncharted pages from the life of this young Maratha legend and bring forth inspiring stories for today’s  generation. Bringing a historical figure like Shivaji alive on our channel allows us to further our cause of providing meaningful entertainment for our audiences. Slotted for the weekends to build our weekend viewership, with Veer Shivaji we foray into the historical genre for the first time.”

Commenting on their new show Abhimanyu Singh, Contiloe Telefilms says, “It is an honor for us to document the life of such a great Maratha warrior for COLORS. A great story needs an equally great setting to make history come alive, and that is exactly what we at Contiloe work so hard at creating. Every aspect of the show has been well researched, right from the story to the look of the characters to the outfits and the sets This is one of our most ambitious projects and we have left no stone unturned in bringing it to life with the best of sets, costume to the cast with actors like Milind Gunaji and Shilpa Tulaskar portraying key roles.”

Veer Shivaji will recount events starting from Shivaji’s growing years – the training in his childhood, to the warfare’s and marvelous contributions he made in the history of India as the warrior king. The biopic will also present an important aspect of the legends story - his mother Jijabai, a driving force that inspired him and was instrumental in cultivating the spirit of bravery and humanism. It was under Jijabai's guidance and tutelage that Shivaji tasted his first success of acquiring a fort at the tender age of sixteen.

The show brings together the most talented set of Marathi theatre, film and television actors to essay the powerful roles from history. Playing the protagonist, the fearless hero of Marathas - Shivaji is Paras Arora. Portraying the Visionary character of Shahaji Raje Bhosale, Shivaji’s father is Milind Gunaji; Jijabai - Shivaji’s mother, his source of strength and inspiration will be played by Shilpa Tulaskar. Mandar Jadhav plays Sambhaji, Shivaji’s elder brother while the tyrant ruler of Bijapur will be played Ali Hasan as Adil Shah and Natasha Sinha will play Begum Huzur.