Ropes in Varun Arora and Shobhit Mathur as ECDs and Amit Ahluwalia as VP Client Servicing. 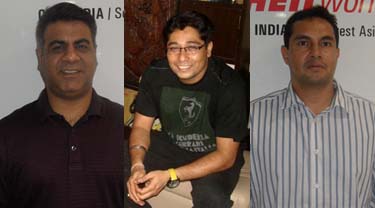 Ropes in Varun Arora and Shobhit Mathur as ECDs and Amit Ahluwalia as VP Client Servicing.

Cheil Worldwide SW Asia has announced an expansion of its creative and client servicing force in India. The agency has brought in Varun Arora and Shobhit Mathur as Executive Creative Directors and Amit Ahluwalia as Vice President Client Servicing.

An advertising professional and alumnus of the American Film Institute, Varun Arora joins the agency from Rediffusion Y&R where he was a Executive Creative Director working on the LG account. He has worked on numerous other brands namely Amway, General Motors, Hyundai, Nokia, Sony, Aiwa, MTS, IKEA, GSK, Times Jobs, Microsoft, NIIT, Olivetti, Philips, Kelvinator-Whirlpool, Straps, Las Vegas Visitors & Convention Authority, Nourishco, Radico during his seventeen-year stint in Mumbai, Delhi, Los Angeles, Las Vegas and San Francisco. He began his career in advertising in 1991 as a trainee with Contract, leaving as creative supervisor in 1996, to study films in the US.  While he was in the US he worked with as Creative Group Head with agency brands such as RR Partners in in Las Vegas and in Los Angeles; Leo Burnett & Mad Dogs and Englishmen in San Francisco On returning to India In 2004, he joined Bates Enterprise (then Enterprise Nexus) as ECD and then moved to Innocean In 2006, in the same capacity. He then set up Aqua Communications in 2007 before moving back into the agency circuit to RDY&R in 2008.

Arora has also directed several commercials and short films and has been the winner of the 2006 Mumbai Ad Club ‘Gold’ and ‘Silver’ for AIWA including several awards for Las Vegas Visitors & Convention Association, NIIT, Olivetti, Microsoft, etc.

Shobit Mathur, a former Cheiler returns to the fold after a 7-year stint with JWT where he was AVP & Sr. Creative Director. Prior to JWT, he was with Everest DY&R, This advertising professional with over 13 years of experience has worked in businesses across Mumbai, Delhi and Bangalore, and has tremendous understanding of consumer sets that has been further sharpened working on power brands and upcoming businesses struggling to create an identity in a fiercely competitive market place. Brands include Mirinda (Pepsi Co), Emirates, Hero Honda, Dettol, Sony, Panasonic, Timex, Parle, United Breweries, ITC Samsung, Monster.com, Commonwealth Games 2010, Apollo Tyres, Romanov Vodka, Spice Telecom and Hotspot amongst others.

A recipient of numerous awards and accolades for his work, Mathur’s most notable are the Nominations at Cannes Advertising Festival for Apollo Tyres Campaign, New York Festival Silver and Effies Silver for Red Ribbon Express (Team Awards), the ABBY Award and AAAI Award.

Amit Ahluwalia joins Cheil from Ogilvy & Mather, Delhi where he was Vice President, Account Management, where he was responsible for the Coke and Pernod Ricard business among others. With more than a decade and a half’s experience in advertising, career began with Contract in 1995 where he played an central role in the launch of Whirlpool. He then moved to Lintas as Brand Services Director and managed Maruti Esteem and MTNL. After a four-year stint with Lintas he moved to Wizcraft for a year managing brands such as Nestle, Schwarzkopf, Honda Accord and then on to RK Swamy BBDO where he was responsible for ICI Dulux Paints and Everfresh frozen vegetables - CFCL. Soon after, joined McCann Erickson in 2007 as Business Director and worked on the Coke and MasterCard accounts.