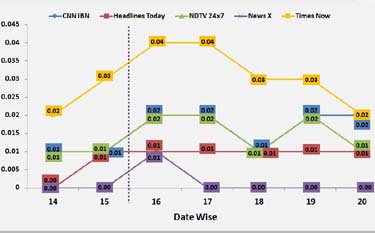 Had television channels not been there Anna’s movement wouldn’t have been such frenzy across the nation. Hundreds of cameras at Ram Leela ground in the capital made a shabby looking muddy ground India’s biggest broadcasting venue. TV channels did their best to give the detail coverage to Anna’s movement. From jumping barricades to swamping the back stage at Ram Leela, they captured every bit of the show.

It wasn’t only the lakhs of supporters who came on street to support the movement against corruption, the viewers glued to the news channels to remain up to date on the fast changing development. The non-stop coverage has seen a huge surge in the viewership of the news channels. 16th Aug was the date when Anna Hazare started fasting, resulting in spike of Average TVRs. The English news genre has jumped up 63% from 0.33% in week 33 to 0.54% in week 34 (14th August to 20th August) of TAM 2011.

Among English news channels Times Now continues to get highest TVR’s and hence occupies 1st position across the target groups and markets. While CNN-IBN remained at No.2 position, NDTV 24x7 enjoyed No.3 spot throughout the week 34 of TAM 2011.

Take a look at the graphs below: