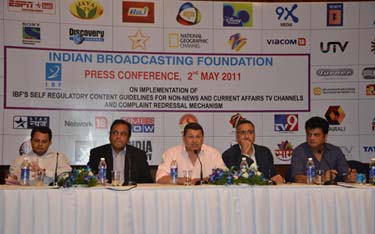 With around 110 million cable homes in India operating with an illusionary existence of an independent autonomous regulatory body over last the 15 years, the Indian Broadcasting Foundation (IBF) has finally unanimously approved to a “Self Regulatory Guidelines and Complaints Redressal Mechanism” ushered through the ‘Broadcasting Content Complaints Council’ (BCCC). This announcement was made yesterday by Uday Shankar, Chief Executive Officer, STAR India and President, IBF along with a panel of broadcasters and other IBF members including Punit Goenka, Managing Director and Chief Executive Officer, ZEEL and Haresh Chawla, Group CEO, Viacom 18.

“Broadcasters like Zee, Star and Sun create more content in a year then the entire film industry. Also, it’s a country of great diversity wherein TV viewing is a family culture and not restricted to individual four-walls. The guidelines have been existing for long, but now the members itself are taking the charge through IBF. Thus it is a conscious, voluntary step and IBF members have not violated any diktat,” explained Uday Shankar, Chief Executive Officer, STAR India and President, IBF about the rationale for setting up BCCC.

This new code of conduct under BCCC will be applicable to Non-news channels including general entertainment, children, special interest channels, refraining the  news channels because of the presence of their own self-regulation body- News Broadcasters Association (NBA). IBF has adopted with suitable alterations the Ministry of Information and Broadcasting Self Regulation Guidelines for broadcasting sector draft version of 2008 that has been formulated further after a series of seven rounds of discussions with as much as 40 stake-holders from various areas including government officers, broadcasters, non-government organisations (NGO) and members of civil society participation in the process.

Although a broad content guideline has been in existence since 2005 but this new set of rule would govern all the non-news channels broadcasted through various mediums including cable, terrestrial, satellite, DTH, IPTV, Mobile or HITS or through any other platform to be developed in future.  Currently, the constitution of BCCC is a 13 member body consisting a chief justice of a High Court/Supreme court along with four non-broadcaster members, four members from any national level statutory commissions (including  such as National Commission for Schedule Tribes, National Commission for Minorities, National Commission for Backward classes and National Human Right Commission) and four broadcaster members.

The chairperson and other members shall be subjected to hold the office for a period of three years while the Broadcaster member shall be changed after every one year. As of now, Justice AP Shah, former chief justice of Delhi High Court has been appointed as the Chairperson of the body along with Professor Anand of Jawaharlal Nehru University and Nandini Sardesai in the Non-Broadcaster member’s category.

The mechanism for the self-regulation of content will be two pronged operating at two levels- at the Broadcasting Service Provider (BSP) level and the Industry level. Also, each broadcaster will form a standard and Practices (S&P) department with a head of department for its channel or nominate a dedicated person as Content Auditor to deal with the complaints.

The processing and disposal of complaints is also a two tier process wherein the grievance addressed at the BSP level is set as the TIER- 1level. Under this, a consumer may file a written complaint within a week of the violated content programme to the auditor with his/her full details and if the auditor considers a breach of the content, he makes sure to modify or withdraw the content, subjecting to the opinion of S&P department.

Under the complaint readdresal mechanism of BCCC (Tier-II), any person or group that files a complaint directly to the body within 14 days of the broadcast, shall be put to the Chairperson of BCCC. The chairperson after a rounds discussions and actions may pass an interim order directing immediate withholding of the offending telecast by the channel or may direct the channel to send its justification within twenty-four hours, just before the final order of BCCC.

The self regulatory body has a time of three weeks from the receipt of complaint to pass its final judgement. In case of complaints received for non-members of BCCC, the issue will be forwarded to the Ministry of Information and Broadcasting.

In case, if any channel is found not adhering to the directions set by BCCC, then the apex body may issue a warning to implement the direction in next forty eight hours or may even ask to air an apology.

“The actions against any complaint would be directive in nature and not monetarily. It can be very severe action and we can even recommend the government for the cancellation of the license of the broadcaster if required,” explained Shankar.

Furthermore, the content under the BCCC certification has been broadly divided in to two categories – General (G) and Restricted (R). The G category content will be subjected to non restricted time for the broadcast while the R category content falls under the viewing of mature audiences and will be telecast within the fixed time slot of 11pm to 5 am.

“We ourselves would be marketing on our channels about this. Guidelines would be applicable from 1st of June and will also bring changes in the timings of some shows,” said Punit Goenka, Managing Director and chief executive officer, Zee.

Currently 20 companies are members of IBF who have around 270 channels under them. In this country where TV viewing is a social phenomenon and it has created more awareness than any other form of government programs, this is indeed a corrective measure to keep a check on the content. However the matter becomes grave for youth-oriented channels like ‘MTV’, ‘V channel’ and ‘Bindaas’ that run a spate of youth driven shows falling under the category of mature audiences.  But if it all becomes successful, then it shall be a global model changing the face of the entire broadcasting industry.