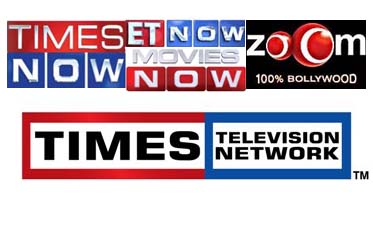 Announcing the new tariff, Sunil Lulla Managing Director and Chief Executive Officer of Times Television Network said, “Times Television Network is a very uniquely positioned Television bouquet which offers distinctive entertainment and quality information to urban affluent audiences and reaches 35%, more viewers than the previous year. Each of our channels has a successful track record and has contributed to growing its category. The Ad Rates reflects the true value we offer to our very valued customers. We will continue to be differentiated, competitive and ahead of the curve”.

With more than 2000 brands on the network, these leading channels on Times Television Network with distinctive offerings have continued investment in quality programming with the growth of the market, is not alone in undertaking its annual rate increase.

The recent success of MOVIES NOW and the ongoing domination of TIMES NOW, coupled with the completely distinctive offering of zoOm and the rapid  rise of ET NOW, it seems only appropriate for the Network to command a premium over its competitors.  Besides Advertising and Branded Content Solutions, the Times Television Network has scaled its subscription business via the Bennett, Coleman Distribution joint venture, Prime Connect. The Network is also focusing on generating revenue from Syndication and Digital Streams.