The Indian social networking site has robust growth plans including the global company IPO. Find out more in the store! 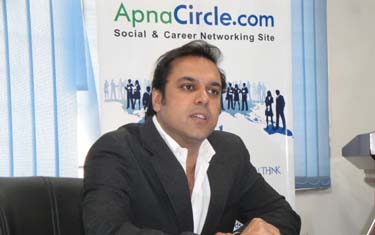 The Indian social networking site has robust growth plans including the global company IPO. Find out more in the store!

With the rising working population and the increasing employment opportunities due to urbanization and globalization in India, networking has become an integral part of employment business. As per various reports, Indian market is expected to be the world’s largest working population market within two year’s time. This not only creates an emergence for the specific social media networks for business professionals but also a platform that segregates the professionals from the amateurs. Thus basking on the same notion, Yogesh Bansal, an MBA from Information Technology and Finance from University of North Carolina and a serial Entrepreneur, incepted Apnacircle in 2006. And he too, like others has an interesting tell-tale for the same as he exclaims, “The social networking rage in the US nurtured a dream of starting a similar business in India. Based on extensive market research, I witnessed a huge scope for growth in this Industry. I saw this opportunity of huge youth population and the need for a property which allowed our youth to connect and at the same time derive value out of it for their individual growth. Based on my observation, I researched and interestingly found out that the youth were rating their friends and career at a high. So, research and catering to what the consumers wanted was the key and hence, I decided to pursue the same.”

But his roadmap was mucronated with major hiccups primarily because the internet ventures at that time were in the evolution phase every passing day, and thus the challenge was to constantly tweak the strategy and innovate. But soon enough, Yogesh equipped himself to the rules of the game as he recalls and says, “I believe coming back from US and setting up ApnaCircle.com in India was most challenging for me. Because the most important element was to find the right niche- to find the gaps in the market and come up with a unique, relevant and useful concept for the consumers which could fulfill their needs. This was tough, but getting more practical with the advancement of technology helped me to a great extent.”

But like any other, budding entrepreneur, his self-belief and conviction led him to sail smoothly in those tough waters. And today ApnaCircle.com is a three-year-old professional/social networking portal that has not only charted place for itself as the world's second largest professional social networking website but every day almost 4000-5000 users register themselves on the site.

But this all doesn’t come on an easy cost. Ask Yogesh as he avers further, “I always look at widening my reach. That makes my life extremely hectic. Also my straight forward approach, if I see something wrong I immediately react to it which harms me.” Thus in order to win some, you lose some!

Undoubtedly the growth of social networking websites has been tremendous for the past few years in India. Primarily based on interactions & relationships, these sites function as important tools for business professionals. Networking sites not only allow jobholders to collaborate and network according to their business interests but also enables them to share knowledge, stay informed and widen their business prospects. Thus to bridge the same gap, his company went for a global M&A move at the right time. As a Joint entity- ApnaCircle-Viadeo-Tianji-Unyk, the company holds a global network of over 33 million users. The merger, acquisition and the integration has not only helped its members-both global and local to double their reach and widen their circle but also helped in increasing the growth rate of ApnaCircle’s network to 100 thousand users per month.

But Yogesh isn’t satisfied with this one. As he has more plans in store for his company, “I now want to take ApnaCircle to the mobile platform, and open up our API’s so that the developers can develop innovative products for my user base. And also, definitely, taking the global company IPO is on my agenda,” gushes Yogesh. So, make a way for the Indian Linkedin?!