The 8-page SuperWrap innovation is a joint effort of Grihshobha and Tanishq and Maxus Bangalore. 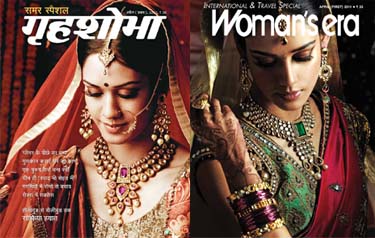 The 8-page SuperWrap innovation is a joint effort of Grihshobha and Tanishq and Maxus Bangalore.

Delhi Press Group publications - Grihshobha and Woman's Era - in collaboration with Tanishq Jewellery have unveiled the largest ever collaborative cover in magazine publishing in India. Spread across eight A4 sides, the Super-wrap Cover folds around the main magazine multiple times. The cover unfurls itself to present one continuous expanse equivalent to four magazine covers each side.The cover is featured in the April issues of six of the eight language editions of Grihshobha and in Woman’s Era.

The 8-page SuperWrap concept is a joint effort of the Grihshobha Marketing Innovation team and the marketing team at Tanishq and Maxus Bangalore. This could be the game-changing format that creates a new palette of inventory possibilities for the magazine publishing business and its invention could spell a new boon for the advertiser seeking an expansive canvas to showcase an array of products with splendour and stated grandiosity.

Usually the domain of the FMCG giants, this time it's Tanishq – from Titan Industries Ltd., who comes on board as the first advertiser to sign up for this historic and path-breaking concept for the magazine publishing industry. In a trail-blazing bid for the innovation, the release order spans 7 languages of the Delhi Press Group. The Tanishq SuperWrap covers (quite literally) all it's flagship properties, and will appear simultaneously in the April 1st 2011 issue of Grihshobha Hindi, Marathi, Kannada, Gujarati, Bangla & Tamil and Woman's Era in English. All 7 magazines together will be the flag-bearers of this innovative cover which wraps itself around the magazine twice over, lending a quadruple spread on the outside and inside of the magazine.

The concept that evolved through the quest for an innovation, sought by Tanishq, was initiated and fine-tuned by the entire team at Delhi Press and appreciated in letter and spirit by the entire teams at both Tanishq and Maxus Bangalore - both teams who contributed to chiseling the idea to perfection.

Sharing the details of the concept, Paresh Nath, Editor & Publisher, Delhi Press Group, said, "It was a nearly impossible task at first, as it challenged established production norms and would require to completely change the fundamental process by which a magazine is published. More so for the large numbers we publish." He goes on to add, "In the end, the spirit of innovation lead to the discovery of another indigenous process by which we are gearing up to for the several more orders for SuperWrap that are in the pipeline." These efforts were accomplished without any delay for more than 800,000 covers at the high-speed printing and production facilities of the Delhi Press Group.

Bhuwan Gaurav, Head - Marketing at Tanishq & Zoya stated, "This is a simple, yet game-changing and awe-inspiring canvas." The core concept was to bring together the entire Tanishq Jewellery wedding range under one single viewing for exhibit value, selectivity, and decision-making.

"This was a perfectly planned execution from the conceptualisation of the idea by the Sales team, to every step through dummy visualisation, idea presentation, and finally a win:win closure with the client," added Anant Nath, Director, Delhi Press Group.

Sirish Chandrashekar, Senior Manager, Marketing of Tanishq who championed this project from the advertiser-end, points out, "The grandiosity of a SuperWrap Cover canvas is bound to yield an immediate and  upward perceptual spiral along with a huge trust build-up for the brand". He adds, "Apart from being a delight for our creative team  to work on, it was a wonderful experience to have worked with the Delhi Press Group Sales & Marketing team, whose complete involvement at every stage helped us navigate through all uncertainties in execution of this spectacular opportunity to experience"

Amyt Bhatia, Director - Sales & Marketing, Delhi Press Group, who lead the conceptualisation, visualisation and canvassing narrates, "The SuperWrap Cover is a game-changer for the way magazines are perceived and experienced by both readers and advertisers, anywhere in the world, iconic in it’s disruptive and yet inclusive format. Without being intrusive, this innovation ensures that the reader will spend disproportionate time on the Tanishq innovation. The sensory delight that a magazine offers, indulges our readers and creates a huge propensity for planned or impulsive purchase decision through the 'power of the reader's desire to be influenced by the magazine'. This innovation seemingly has never been crafted in such splendour in the known history of magazine publishing, and with this we have a pipeline of orders which we will only do selectively, with brands which give and take from the grandiosity of the SuperWrap Cover."

M Sajeevan – Clusterhead-Print, GroupM and Victor Britto, Investment Group Head of Maxus, who together guided the execution of the media activation from Maxus Bangalore, highlight, "This would not have been possible without the cohesiveness and  integration of the Delhi Press Team with our client Tanishq's objectives. Delhi Press has not just earned a large chunk of investment from the advertising pie, but a leap of faith by their roster of clients such as Tanishq."

Sanchayeeta Verma, General Manager, Maxus said, "we are proud to be part of making history with a never-known-before media innovation in the magazine business."

This cover was designed and tested across groups of readers to view the information consumption pattern and the physical handling of a 8-sided cover. Creative execution took all the research facts into account.

Anant Nath reiterates, "In our ever-evolving quest for revolutionary audience engagement programs, we cannot allow reader-fatigue to set in either, through overdosing an innovation, however inclusive it seems."

“When Grihshobha first approached us with the SuperWrap idea, we were stunned by the audacity of the scope of the project. We were not sure on the operational possibilities of executing the idea. Nevertheless, as both Grihshobha and Women’s Era readers are a part of our core high-spending household target consumers and the numbers were large, we decided to jointly explore the idea to its logical end. It’s been an amazing enterprise of joint efforts and a dedicated production team from Delhi Press, which has successfully created this media milestone. It will be a hard act to replicate, but we wouldn’t be surprised if the same team comes up with an idea which beats this project in the near future,” reminisces Kishankumar Shyamalan, Senior Investment Director, Maxus South.

"The client while apportioning a large part of their print budget to this brand creative innovation was also highly enthused at the potential of adding another first to brand Tanishq's endeavors of being viewed as pioneers in marketing brand innovation," adds Victor Britto.

The actual deal value is under a SuperWrap, but the single-insertion, simultaneous release deal is touted to be a very high value deal by any yardstick. For the magazine business, this is proportionately larger than the massive innovation done recently by some leading dailies with an automobile major. Specially since the entire activation is on the first day of the financial year.

Importantly, it is exclusively with Delhi Press, since it is at their printing facility, that the the production flow of integrating a stunning large cover with multiple folds onto the main body of Grihshobha and Women’s Era manually without slowing the processes happened. Rajinder Grover, General Manager - South, Delhi Press backed by Kumaran Gangadharan who heads Bangalore region, says: "it proved to be a big but highly satisfying challenge. Not only were a total of 800,000 covers printed (Combined print runs of Grihshobha and Women’s Era), but the folding with a large spine had its own challenges."

This path-breaking innovation is likely to catch the fancy of both the creative and media planning communities as it provides a 4-page wide canvas in continuum for grandiosity in expression. Besides it reinforces the belief of the highest trust-worthiness and influential medium that a magazine is to it's audience.