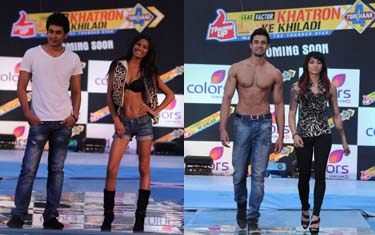 Torchaared 13 couples of this season will be the Macho Man, Ahran Chaudhary and the Super Model Diandra Soares, the Handsome Hunk Sangram Singh and the Adorable VJ Mia Uyeda, the Very Charming Dhiraj Amonkar and the so called Indian-Shakira Mauli Dave, the Hyper Boy Sumit Suri and the Bold and Sexy Kashmera Shah, the Stuntman Khalid Chowdhury and the Feisty Sambhavna Seth, the Desi Boy Parmod Dahiya with the Desi Firang Dina Singh, the Dilli Puttar Amit Mehra with the Popular Roadie VJ Bani, The Ever Confident Shashwat Seth with the Sweet and Sexy Aliesia Raut, The Young and Dashing Sunit Bhatia with the Effervescent Aashka Goradia, the Martial Art freak Saurabh Roy with Favourite Bahu Smita Bansal, the Very Romantic Praveen Jain with Daring beauty Poonam Pandey, the Fitness Freak Sandeep Sachdev and the Face of Women’s Cricket Anjum Chopra and the Enterprising Dhaval Thakur with Bollywood Actress Aarti Chhabria.

Speaking on the new season of Khatron Ke Khiladi, Ashvini Yardi, Head of Programming, COLORS says, “This season of Khatron Ke Khiladi is going to be way more torturous and dangerous than all the earlier ones...hence the very fitting name  Torchaar. We’re looking at thirteen jodis this season who will be participating in the show and undertaking some of the most physically and mentally challenging tasks ever set on the show. What’s going to be of utmost importance this season; along with being able to perform under extreme pressure and dangerous conditions; is the ability of the participants to work together as a team. These 13 pairs can expect to face their worst nightmares as they set foot in the beautiful locales of South Africa. And the participants are going to have to not just build a rapport with their partners, but will have to have enough blind faith and trust in them as well while performing the stunts on the show. Here’s wishing them all the luck and hoping to see some brilliant action on the show.”

This time the stunts get deadlier as they test human endurance against the wild backdrop of Cape Town, South Africa. Akshay Khiladi Kumar will put the contestants through tasks that will test them physically and emotionally. He will mentor and inspire them but not console because it is his prerogative to put them through Torchaar. The last man standing won’t be a winner; he’ll be the ultimate Khiladi. The survivor will be knighted with the title of a ‘Thunder Star’ and his reward will be an opportunity to feature alongside Akshay Kumar in his next electrifying Thums Up advertising campaign.

Deepak Dhar, Managing Director, Endemol India says, “We constantly strive to bring innovative content to our viewers. Fear Factor - Khatron Ke Khiladi is one of our biggest properties and we are excited to present a renewed fourth season. Fear Factor Khatron Ke Khiladi has always kept the viewers at the edge with its death defying stunts and this time with an integrated partnership with Thums-up, we are confident that it is going to be country’s most watched show.”