Zee News Marketing Head and the architect of the initiative Rohit Kumar received the momento from Sports Minister and Coca Cola India President. 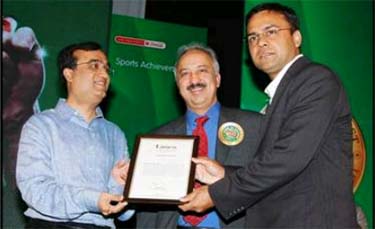 Zee News Marketing Head and the architect of the initiative Rohit Kumar received the momento from Sports Minister and Coca Cola India President.

Zee News `My Earth, My Duty’, campaign launched on June 5, 2010 is an initiative with an objective of spreading awareness on climate change. It aimed at engaging various members of society to sensitize and encourage them to take concrete action towards mitigating the effects of Climate Change. As a result, on 25th Aug 2010 a record was set; of planting more than 73 lac trees in one single day across the length and breadth of the nation covering more than 34 cities and over 1 lac villages with involvement of over 1 crore volunteers. This campaign is one of its kinds that has not only reached the grass root of India but involved the youth of India in collaboration with various youth influential organizations

The Climate change and environment has been the key to the survival of the humanity. Henceforth, this campaign is being themed as one of the mass awareness initiatives; aimed at motivating people to bring about behavioral change to fight the menace of the climate change and environmental degradation and more importantly the roles that each one of us can play in saving our Mother Earth.

The campaign is being drawn up as an innovative one from all conceivable aspects and has been designed in such a way that it should reach a sizeable population effectively across the nation. Henceforth, the campaign was carried out not only in the national languages and medium but the local languages and respective mediums also across all ZNL channels.

Speaking on the accolade on behalf of Zee News Ltd, Barun Das (CEO) said , “Climate change is the most significant challenge faced by us. As a responsible news channel, we felt it was our duty to play a meaningful role in promoting causes that are important for us, our society and our future generation. I am glad the effort has found such vast public support.”

Speaking on behalf of Zee News, Rohit Kumar (Marketing Head) said “ When Zee News decided to take up a cause and act in accordance, the country also decided to stick by it. I am glad that Limca recognized our efforts; we shall continue doing such mass involvement campaigns in future as well.”

Here are some interesting and matchless facts of the campaign: