Demonstrates the daredevil spirit of a Thums Up lover in the latest communication with Akshay Kumar. 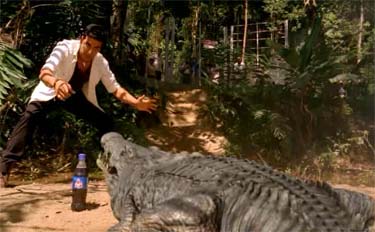 Demonstrates the daredevil spirit of a Thums Up lover in the latest communication with Akshay Kumar.

This summer, Thums Up, one of India’s most iconic and the largest soft drink brand, is all set to storm fans with a new ‘Taste the Thunder’ communication initiative- ‘Yeh Toofan’. In the latest campaign, Bollywood Super Star and Thums Up brand Ambassador, Akshay Kumar reminiscences about the several thunder packed action stunts for his favorite bottle of Thums Up. The communication takes the ‘I will do Anything for my thunder’ attitude to the next level, where Akshay is seen, back in thick of action, performing some adrenalin pumping action such as crashing through the window of an exploding high rise, snatching a Thums Up bottle from jaws of a vicious alligator, taking on a mob of angry gangsters to swimming through strong rapids. This campaign first got previewed to the Thums Up fans on facebook and then releases on mass media channels.

Conceptualized by Sainath Saraban, Executive Creative Director, Leo Burnett and directed by Director, Marco Kalantri  from MAD Films, the communication brings out the whole idea of what length does a Thums Up lover go to grab his precious bottle of Thums Up. In-addition to leveraging mass media, integrated communication plan will also be complimented by a range of on the ground initiatives - road shows and contests across all key markets.

The exhilarating campaign shot in Kuala Lumpur, Malaysia attempts to highlight a gripping tale with series of daredevil acts by Akshay Kumar for his bottle of Thums Up. In his quest for his Thums Up, Akshay uses a combination of bold action and smart thinking to outwit all the challenges, demonstrating the daredevil attitude of a Thums Up lover.

The new communication opens with Akshay drinking a Thums Up while hanging out with a girl in the middle of a vast, rocky terrain when the girl playfully asks him, what all have you done for your Thums Up? What follows is Akshay going into a flashback, remembering all the extreme situations and actions he did such as jumping out the window of an exploding high rise, snatching a Thums Up bottle from jaws of a vicious alligator, taking on a mob of angry gangsters to swimming through strong rapids- all for hisa bottle of Thums Up. A jingle with the words ‘Yeh Toofan!’ echoes Akhsay’s thirst for thunder in the flashback sequence.

Coming back to reality, Akshay shrugs and modestly responds to the girl saying- Nothing Much., to which the girl reacts- Really? The girl then takes out a bottle of Thums Up and throws it from the cliff innocently saying ‘Oops’. The communication ends with Akshay, leaping off the cliff to get back his bottle of Thums Up.

Commenting on the film, Sainath Saraban, Executive Creative Director, Leo Burnett, said, “The idea behind this whole approach was convey that a true Thums Up drinker will go to all possible heights to experience the exhilarating taste of Thums Up. Hence, we thought of communicating a fascinating tale through a series of grueling and daredevil feats by Akshay Kumar, where he recaps the extents that he has gone to for his Thunder. This film truly lives up to the stature of Thums Up.”

According to Srinivas Murthy, Director - Marketing, Coca-Cola India, “The latest communication further builds on the core values of the brand and takes the whole idea of ‘I will do anything for my thunder’ to the next level. The Thums Up drinker indulges in adrenalin pumping action to get a bottle of his favorite soft drink - Thums Up because he loves to do it and not because he has to. To bring out this element, the latest campaign shows Akshay Kumar recounting all the action packed adventures he underwent to get his bottle of Thums Up.  The communication showcases the journey and kind of action that Akshay took chasing his ‘Thums Up'. I am sure that this new communication will strike a chord with the Thums Up consumers.”

“Thums Up is India’s most resilient iconic soft drink brand, and has a strong resonance with action, energy and a go-getting spirit. My association with Thums Up over the years has made me do some real exciting action and given me opportunities to push myself and indulge in extreme actions. The new campaign is packed with action, adventure and humor, where, I recollect the kind of daredevil stunts I have performed to get my bottle of Thums Up. I am sure my fans will like our new touch in the campaign and have a lot of fun watching this experience,” added Bollywood Superstar and Thums Up Brand Ambassador, Akshay Kumar.