It’s ART-vertising, and not advertising that defines and drives the 6 years old agency Adept Media. 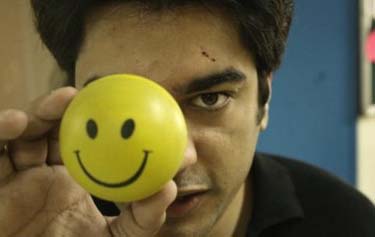 It’s ART-vertising, and not advertising that defines and drives the 6 years old agency Adept Media.

Most people stumble into advertising. But here’s a story that defies most clichés, and it shows in the work that Vandan Chopra, and his Agency Adept Media have churned out in the short span of being in existence (from 2005). With colors on the brighter side, imagination on the wilder side, and advertising on the ARTy side, or as Vandan likes to define his work, ‘it’s ART-vertising!’.

A maverick in the way he thinks, and non-conformist in the way he runs the agency, this 29 year old has already delivered this promise to a score of brands he’s worked with, some of them being HP, Blackberry smartphones, Adobe, NDTV, Park Hotel, Goodyear, India Gate Basmati, Shangri-la, Café Coffee Day, Grover Vineyards, California Almonds, Plan International, Brindco Wines, Xerox, United HealthGroup to name a few.

A distinctively different logo for Adept that symbolizes their mindset that ‘creatives’ are always ‘work in progress’ is a reflection of the fact that he feels that they can always better what they’ve done.

When we asked Vandan, what drives and differentiates his agency, he promptly threw back, “Do your best work today, and better it tomorrow, is the motto with which we approach every day at Adept. But there’s a deeper reason to why we’ve focused our energies as an Agency on the Creative side of the business. It’s a belief in what we call ‘Return on Creatives’”.

He further elaborates, “Theoretically, ROC, is essentially a belief that a client needs to spend less media money to generate a given level of reach and recall if the creative’s are high on likability, comprehension and credibitility. To deliver this effectively, we follow a proprietary research based model of generating workable insights and benchmark them with the competition, before actually writing out a creative brief. This is the most tedious part of developing a creative, because once the brief is written, the rest of it is free thinking, and free thinking is why I love the creative business”.

One example of this work wherein the brand has been turnaround is the runaway success of ‘Grover Vineyards’ and their ‘Art Collection’, where the creative duties for building the brand from the logo upwards lay with Vandan and team. Today, this once dying brand commands a market share of close to 11% and is the third largest selling wine in the country, besides having augmented acceptability of the brand on tables across India.

Another example of his creativity can be spotted in the recent winter campaign for California Almonds with Karishma Kapoor, where Vandan’s deep neck for understanding of the consumer and very simple delivery of the message has resulted in strong gains for the almond category as a whole, with a current YOY growth of over 20% in an industry that’s been steadily growing at a stable 4% for over a decade.

One thing that absolutely sets him kicking is the variety in his work. As he puts his favorite one-liner, “Here it changes every hour. It's shoes in the morning, IT in the afternoon, software during the lunch brainstorming and E-waste before the day ends.” And little did he know, that what started just as an escape for him to abstain himself from working for any one company for at least a year, has turned actually into his prime passion. But much to his funny side, he avers, “Don’t know what I do at work or don't know if I work. But I know what we make works, and frankly, as long as our work is the fad, it's works for me.”