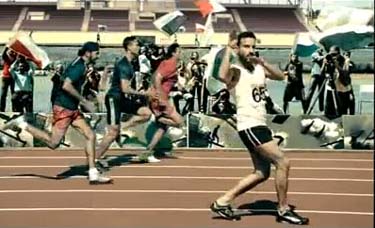 Ogilvy Mumbai has recently launched a new TVC created for Amul Macho, the innerwear brand. The new ‘Race’ TVC builds on the campaign idea of ‘Bade aaram se’. The creative thought of ‘Bade aaram se’ was developed by Ogilvy Mumbai last year to up the imagery of Amul Macho and make it young and youthful. The cool, easy-does-it attitude is a different take on macho as opposed to the rugged, high- testerone positioning that most other innerwear brands have.

[youtube]http://www.youtube.com/watch?v=lJL5CBS1LxY[/youtube] The new TVC takes ‘macho’ outside the context of a typical action sequence and gives it a completely light hearted and fresh take. The ‘Race’ sequence is an example of how ‘Bade Aaram Se’ as a thought has opened up the multiple dimensions that can be given to today’s macho man, which is completely different from the staid action/attraction space that every other brand labours on. Credits: Creative: Abhijit Avasthi, Anurag Agnihotri, Ashish Naik, Nasrullah Husami Account Management team: Asheesh Malhotra, V.R.Rajesh, Madhavi Unni Production House: Corcoise Director: Prasoon Pandey