CNN-IBN, IBN7 and CNBC-TV18 remain clear leaders in their respective genres. Zee News surprises all in a core TG. 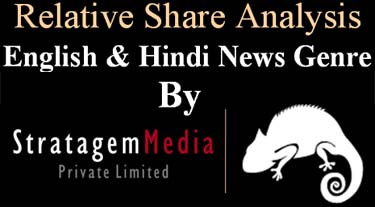 CNN-IBN, IBN7 and CNBC-TV18 remain clear leaders in their respective genres. Zee News surprises all in a core TG.

Whatever the Union Budget 2011 may have done to India but for Network18 it has clearly done wonders. While CNN-IBN remains the numero uno among English news channels across all audience groups, IBN7 have taken No.1 position in its category among core audience groups. Network18 Group's business news channels CNBC-TV18 and CNBC Awaaz are also on top in their respective genres.

According to TAM data released for week 10, 6 CNN-IBN shows on budget day feature in the list of top 10 English programs. Holding the top position on budget day was CNN-IBN’s Budget and You. At second spot was Karan Thapar’s Face The Budget. No.3 and No.4 spots were also captured by CNN-IBN programs and at the fifth spot was CNBC TV18’s The FM Interview hosted by Raghav Bahl. (Source: TAM, Market share (%), CS AA 25 +, Market: All India 1mn+ Period: 28th Feb’2011, 1100-2300 hours)

Only two programs of NDTV 24x7 could make it to the list of top ten programs. Despite analyzing the budget in an interesting way with excellent graphics and lavish sets, NDTV failed to grab the eyeballs. Times Now and Headlines Today programs also feature in the list of top programs with one program each.

See the chart below for two core TGs (25+ years age group is taken as core TG that is important and preferred by marketers for Budget related programs):

Rajdeep Sardesai, Editor-In-Chief, CNN-IBN, IBN7 & IBN-Lokmat, said, “Our undisputed leadership on the Union Budget Day goes to prove the fact that when it comes to in-depth coverage of an event of national importance, the viewers prefer CNN-IBN & IBN7. The latest TAM report also reflects the true popularity of CNN-IBN & IBN7.”

Ashutosh, Managing Editor, IBN7, said, “IBN7 has always been seen as India’s channel of Impact. The fact that we are also No.1 during the FM’s speech goes to show that IBN7 is the nation’s choice on a big news day.”

On the other hand, CNBC-TV18 dominates general & business news channels, across markets and across all audience groups; more than 5 times the nearest Eng Biz news.

CNBC-TV18 delivery is more than the combined delivery of all competitors and more than 5 times the nearest competitor.

This is the 11th year in a row that CNBC-TV18 has been the leader in English news. Not only that, but this has also been one of the best performances for the channel in the recent years.