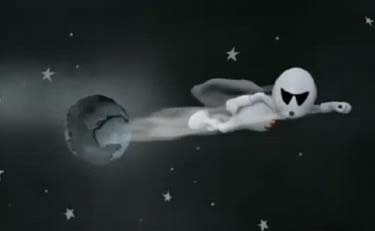 Vodafone is back with their most famous advertisement character ZooZoos and its 3rd edition was launched yesterday to announce 3G services of Vodafone. To denote the huge shift in technology from 2G to 3G, ZooZoos have become Super ZooZoos to communicate Faster, Smarter and Better services with Vodafone 3G.

With the first TVC, Vodafone has launched 360 degree campaign conceptualized by Ogilvy & Mather.

Introduced for the first time in 2009 during IPL-2, Zoozoos are white creatures with ballooned bodies and egg heads who were used to promote various value added services of Vodafone. These ads though look animated are actually real humans in the Zoozoo costumes.

The first TVC broke in the break after the first over of India-England match on 27th February, 2011. In an exclusive conversation with BestMediaInfo.com, Anuradha Aggarwal, Vice President - Marketing, Vodafone revealed, “There will be some more but this is our primary communication. Once we get the adequate exposure for this commercial, we will launch another. However, this time, the ZooZoo commercials will be in limited numbers unlike before.”

Adding further, Anuradha says, “The teasers have been running with the start of cricket world cup and ZooZoos are strongly associated with the cricket and it started with the IPL-2 in 2009. With two cricketing extravaganza back to back this year, the launch of ZooZoos during world cup will play an important role. We put the zoozoos out whenever we think we have strong message to communicate and this time we are reaching to the consumer with the 3G. Vodafone 3G is live at many places in India like the services are already up and running in Chennai and Gujarat and we are launching the 3G services in the phased manner across the country. Faster, better and smarter is what we want to communicate about our 3G services.”

To launch the ZooZoos this time around, Vodafone took a different approach. To create a buzz for the upcoming ZooZoos, it launched four teasers almost a week before. The teasers left people guessing what Vodafone is supposed to announce this time. The telecom giant had used all the mediums for a week long teaser campaign. Besides, running the teasers on all the TV channels and digital media, Vodafone had an exclusive tie-up with NDTV Group to present the teasers in the form of Breaking News Alert.

When asked, how are these ZooZoos different from earlier versions, Anuradha said, “We knew that this a very exciting thing and we had a whole teaser phase planned in which the consumer does not get to know what the ZooZoos are talking all about. We translated the ZooZoos voice for the first time so that the consumer can understand what they are talking about and then of course we led the consumer on to the match between India and England.”

After the teaser campaign, the final commercial was made available first to more than 12.5 lakh fans of ZooZoos on Facebook and 5.5 lakh fans on Youtube before the telecast during the match. The launch of the TVC was also supported by print and outdoor campaigns across the country. The campaign will be present on all the platforms.

“The new characters of ZooZoos will be loved even more that what it was earlier as they are in the new avatar and we are confident that the Super ZooZoos and the Vodafone 3G will soon be extremely popular,” concludes Anuradha.

On the creative execution of all new, faster, smarter and better ZooZoos, Rajiv Rao, National Creative Director, O&M India said, “The brief was one liner and very simple to launch the 3G Service. We wanted to make a big noise about it because it is completely new for the consumer. It is a huge shift of technology form 2G to 3G and it is going to change the experience of consumers at all. So this is much superior technology which needed to be communicated.”

“Right from the beginning, we were extremely clear about the execution. If you compare 3G and 2G, then 3G is definitely better and faster. But as far as the consumers are concerned, this is just another claim unless they experience it. We wanted to communicate it without ridiculing the 2G as that too is much more important for basic users,” added Kapil Arora, National Brand Head for Vodafone, Ogilvy and Mather.

Speaking on the creative idea, Rajiv says, “We were clearly toying with ZooZoos. We thought that if ZooZoo had represented 2G then 3G should be represented by Super ZooZoos. With the birth of the Super ZooZoo idea, we came up with the superior version of ZooZoo. After cracking that idea, everything became very simple for further execution.”

Nirvana Films has played a key role into the execution from film making to post production. A lot of special effects have been extensively used to create Super ZooZoos. According to Rajiv, “While toying with the ZooZoo, we had a challenge to make a different character out of it.”

But where is the special ZooZoo language this time? Kapil Arora, National Brand Head for Vodafone, Ogilvy and Mather, reveals, “Initially the ZooZoos had kept people busy in decoding their language. But this time, since we wanted to create an impact that ZooZoos are Super Hero, we believed that music will play a better role. The consumers were used to one particular format earlier. This time we needed to break the format also and we believe that it is working together well.”

“ZooZoos have been a great device for us to communicate the value added services of Vodafone in the past. If we were able to show ZooZoo as a super hero in the ZooZoo world then that obviously help denote that the services are faster and better,” concludes Kapil.

Take a look at the teasers: