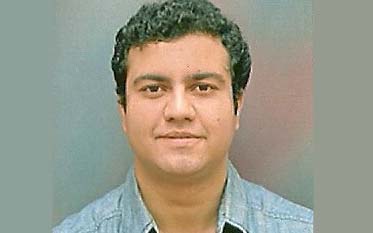 It is often said that creativity comes in all forms, shapes and sizes… But in his case ingenuity stuck to him in a traffic jam! Raghu Khanna, CEO, CashUrDrive hails to the race of young Turks aiming to make it big one day. And much to our surprise, he has already chalked halfway through it. As today, his two and a half year old start up- CashUrDrive is not only India's first On-Wheel Advertising Company but also adorns a long standing brigade of clients in its kitty including- Adidas, Lays, Subway, Coca Cola, Levis, Pizza Hut, Pepsi, Reliance Mutual Fund, Reliance Communication, Reliance Net Connect, Tata Indicom,  Tata DoCoMo and NACO(National AIDS Control Organisation).

An engineer from Indian Institute of Technology, Guwahati, Raghu, unlike many budding entrepreneur had never earmarked a plan on papers to start up his own venture. Infact the story behind his move is quite interesting. As Raghu fondly reminisces, “The funny slogan behind trucks and vinyl stickers on police jeeps caught my attention as I couldn't take my eyes off it. And then came the idea to charge advertisers to put their messages on privately owned vehicles and thus I started my website.”  Little wonder, what Raghu might tag off as a modest start, his website caught attention of 1500 car owners and 8 advertisers within the first week of its launch.

Gifted at creating business concepts that are unique his brainwave-CASHurDRIVE banks on the funda of “Permission Marketing”, relatively a naïve concept in India. But the thing that has worked wonders for him is that CashUrDrive generates a typical Win-win situation for all three- Advertsiser, carowner and the agency itself. As it not only gives the advertiser the complete package to target the Indian demographics but also caters as a perfect solution for rising fuel cost and inflation rates in India for the car owners.

Also, CASHurDRIVE promotes eco friendly methods of advertising wherein the Company is free from the menace of cutting down trees to make the billboards or spoil a Landscape or deface something. As the cars are already running on road and the agency just pastes Vinyl Wraps that don't spoil the paint of the car once removed. Interestingly this concept is a big hit in countries like Canada, USA & Australia and rakes in thousands of dollars for per ad, but in India it’s still in the nascent stages. But least affected by it,

Raghu is in his full gears. As he avers, “I am trying hard to create a niche in this new and exciting industry”. His agency has launched a host of value-added services for its customers. Right from joining hands with HPCL/BPCL for providing fuel coupons to the car owners, to a vehicle tracking system for its clients, a centralised printing of stickers in Bangalore and launching a new vertical called  - CYCLOBRANDS, he is leaving no stone unturned to make this concept popular.  The reason for his aggressive push also stems from the increasing competition from radio taxis and buses using the same mode of advertisement in the country.  However, an eternal optimist Raghu is all qualms and is bull headed towards his goal.

So much so, that his team members also suffer from one common syndrome namely- BSD. Wondering, what on earth it stands for? Well like Raghu they are (B)rilliant, (S)mart and (D)esperate to make things work! This man surely knows how to transform your fuel-guzzling car into a revenue earner for sure!