Conceptualized by JWT, the campaign including a new TVC breaks tomorrow; watch the TVC here. 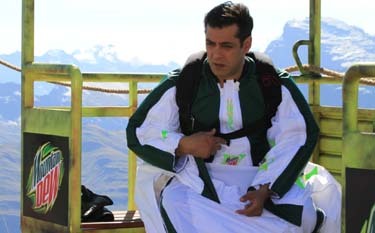 Conceptualized by JWT, the campaign including a new TVC breaks tomorrow; watch the TVC here.

Daring… adventurous… bold… PepsiCo’s Mountain Dew kick-starts this summer with its biggest brand campaign featuring Bollywood’s ultimate action star, Salman Khan.  Shot in the mountainous terrains of New Zealand, the new Mountain Dew commercial is high on the adventure quotient in keeping with the brand’s philosophy of ‘Darr Ke Aage Jeet Hai’.  The star cast of the film extends to internationally celebrated action-adventure ad film maker, Bob Gordon. Set to go on air on February 25th, the exciting new TVC will see Salman taking up the Mountain Dew challenge that required him to jump from one of the highest peaks of New Zealand.

This is the first time that a brand ambassador has been appointed for Mountain Dew, which is the fastest growing brand within the Carbonated Soft Drinks category in India for last three years and is on very strong momentum.

The new TVC presents a perfect blend of adventure, boldness and excitement that captures the true spirit of the brand. The campaign also sets itself apart with the larger than life stunts and the introduction of Wingsuit Flying, an exciting and upcoming adventure sport.  With five helicopters on location, an international crew comprising the director and the elaborate expert stunts team, an unexplored location, a daring sport and the biggest Bollywood star… this 45 second ad film has been shot on the scale of a mega action blockbuster movie.

“Everyone is afraid of something or the other at some point of his or her life. But if you try to run away from fear, you’d be tired and eventually fear will win. So the best way to overcome fear is to face it, run through it because Darr Ke Aage Jeet Hai. The new Mountain Dew commercial truly brings alive this mantra and I love the high action imagery associated with the campaign. We shot in New Zealand with director; Bob Gordon who is an expert in adventure sports led ad films. It was fascinating to see all the stuff happening; the TVC almost looks like a very large budget action film”, said Salman Khan.

Alpana Titus, Category Marketing Director (Flavoured Carbonated Drinks), PepsiCo India Beverages said, “We are excited to unveil this year’s campaign for Mountain Dew, with our first ever Brand Ambassador, Salman Khan. This campaign takes the idea of ‘Darr Ke Aage Jeet Hai’ to the next level. The concept and the action are larger than life and never seen before in India. With this exciting campaign and Salman as our brand ambassador, we look forward to another blockbuster summer for brand Mountain Dew, which has been growing at a rapid pace for the last three years.”

“Mountain Dew campaigns are about ultimate adventure and daring stunts that reflect the brand’s persona. The Darr Ke Aage Jeet Hai campaign was designed as a brand idea to give the consumers a differentiated and thrilling experience. With Salman Khan on board, this year’s campaign promises to redefine adventure and we are confident that it will be well received by the audience. To shoot at that high terrain for the campaign was extremely challenging and exciting. We have never witnessed the production scale like this before… there was a large international expert crew to ensure complete safety of everyone present at the location as well” commented, Sabuj Sen Gupta and Shobhit Mathur, Associate Vice President & Sr. Creative Directors at JWT.

Mountain Dew, the soft drink exhilarates like no other because of its daring, high-energy, active, extreme citrus taste. Challenge, a can do attitude, adventure and exhilaration are deeply entrenched in its brand DNA and the brand has always celebrated the bold and adventurous spirit of the youth. The brand enjoys high salience in the Indian market via a deep and compelling consumer insight of ‘Darr Ke Aage Jeet Hai’. It encourages consumers to overcome their inner fears and try something new, explore new boundaries.

Director for the films: Bob Gordon