A fun filled cricket match between the popular RJ’s and their listeners in Mumbai, Delhi, Bangalore & Kolkata. 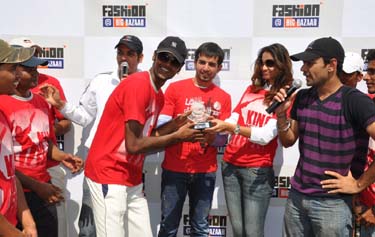 A fun filled cricket match between the popular RJ’s and their listeners in Mumbai, Delhi, Bangalore & Kolkata.

Fashion@Big Bazaar kick started the cricket fever with an interesting combat amongst the stylish and flamboyant RJ’s of Radio City 91.1 FM, Big 92.7 FM, Radio One 94.3 FM and Fever 104 FM in Mumbai, Delhi, Bangalore & Kolkata. Every team had 12 players including 2 RJs in a 10 over match. Three matches were played in every city.

Talking about Mumbai it was RJs Nitin, Ruchi from Big FM, Salil & Priti from Radio City, Sidhu, Urmin from Fever FM & Jay and Gya from Radio One were seen swashbuckling at this tournament. The winning team of this coveted title will be labeled as the ‘City’s most fashionable cricket team’. From 9th February the participating team RJ’s have been urging their listeners to log onto www.facebook.com/fashionatbigbazaar and upload their photos with a caption wearing the ICC merchandise to be in their favorite RJ’s team. Fashion@Big Bazaar announced and introduced ICC Day on facebook with RJ uploading their pictures and appealing the listeners to participate. Different photo albums were earmarked for each city.

The fans had to simply vote, comment and urge their friends to like their uploaded picture. The campaign which ended on 18th February witnessed stupendous response from all over the participating cities. 11 people for each team were short listed by the RJ’s themselves on the basis of their facebook votes. Every RJ was the captain of their team and had 10 listeners to create his own team. There was an in-depth participation from the radio stations representing the participating team throughout the day of the match. Radio OB Links giving hourly match updates along with a simultaneous hourly update and online Facebook integration witnessed huge followers. Non participating RJ’s also canvassed for their colleagues competing in the tournament. Winners were gratified with gift vouchers courtesy Fashion@BigBazaar.

The ground was branded with Fashion@Big Bazaar merchandise which were also displayed & sold at the venue to add to the lively environment. There was an official  umpire and commentator for every match. Interesting anecdotes and pictures from the venue were uploaded on Facebook every 1 hour. The local ground branded with Fashion@Big Bazaar was no less than a battle ground with the people present there cheering their favorite teams. Audience and fans at the venue were given the opportunity to tweet about the matches on Fashion@BB twitter handle, out of which the most interesting tweets got ICC merchandise free at the match.

Talking about this unique activity, Ammar Millwala from Percept Media said, “As Fashion @ Big Bazaar is the authorised retailer for ICC World Cup 2011 merchandise, we wanted to ride on the ongoing cricket frenzy and drive cricket enthusiasts to the store. We wanted to engage the customers, hence we thought of an activity were we could make it more interactive and build a platform to communicate with fans & customers. We have used radio & internet as a platform to reach out to Fashion@Big Bazaar TG as these mediums connect with young and fashionable cricket crazy fans.”

For the 1st time ever Percpet Media and Fashion@BigBazaar has conceptualised and executed Cricket Match between RJ's participating from Radio City, Fever Fm, Big Fm and Radio One. 30 RJ's across Mumbai, Delhi, Bangalore and Kolkata were geared up for the "Cricket Day" on 19th Feb.