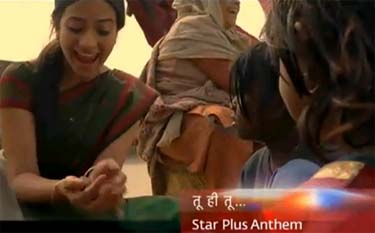 Riding high on the success of its refreshed brand promise of Rishta Wahi Soch Nayi, launched last year, STAR Plus, Star India’s flagship brand, enters the first quarter of 2011 with newer aspirations and renewed commitment to create meaningful entertainment for its viewers. As a channel that celebrates the family with the woman at its core, Star Plus dedicates its success to every woman in this country who is slowly but progressively bringing about the Nayi Soch in her life, in the lives of her family members and society at large.

A woman brings us into the world and strives relentlessly to keep our world together. She touches our life in various avatars; as a daughter she brings joy and laughter, as a wife she offers support and companionship, as a mother she instills beliefs and values. Her entire existence is dedicated to the wellbeing of her loved ones and in fulfilling her family’s needs. To give this unsung hero her due, Star Plus reinforces its brand promise through Ode to the Woman, an extension of Rishta Wahi Soch Nayi with woman at the helm.

To take this expression to the millions of viewers across the country, STAR Plus unveils the Star Plus Anthem showcasing the different facets of a woman. This anthem is conceptualized by one of the best creative minds in the country Piyush Pandey and composed by ace-director-Vishal Bharadwaj.

This campaign thought of “Ode to the woman” will be brought to life through an exciting new content line up. In the first of among many shows celebrating this woman, Star Plus brings Wife Bina Life- a show that pays a tribute to the woman who turns our house into a home. Her role as a homemaker with 24*7 duties and no salary or holidays is never acknowledged. She is taken for granted.  But this will change soon with the launch of Wife Bina Life as men realize that it’s all work and no play being a homemaker!

Premiering on Jan 29 at 9 pm, Wife Bina Life will see average middle class men take up the challenge to be homemakers, while the women of the house go on a holiday. The BBC Worldwide cameras will follow these brave men as they struggle through the days, managing kids, kitchen and the household work that their women managed very diligently. They will know their children like never before, learn how tiring housework really is and, crucially, discover just how hard the woman of the house works to keep their worlds together. Hosted by Mini Mathur and Cyrus Sahukar, Wife Bina Life is filled with wit and humour, tears and tantrums. Above all, it nudges you to think and appreciate woman’s contribution in your life.

Along with this, Star Plus brings slew of exciting shows on Jan 29; ‘Love you Zindagi’ at 7pm, and ‘Pyaar Mein Twist’ at 10.00pm completing the much required weekend entertainment for its viewers.

‘Love you Zindagi’ is the first ever show conceptualized by Imtiaz Ali for Star Plus. The story revolves around a Punjabi girl called Geet who has a great zest for life. Her innocence, her clever ways of dealing with situations and her uncanny attitude and love for life will keep viewers hooked to the content.

Produced by Neela Telefilms, ‘Pyaar Mein Twist’ is the first out and out comedy presented by STAR Plus. The story is about a husband and wife, who are poles apart and head over heels in love with each other and how this is perceived as a problem by people around d them who are conspiring to break their relationship. But will they succeed; will essentially be seen in this hilarious comedy.

Along with the weekend line-up, Star Plus brings Maayke se bandhi…Dor. Starting from Feb 14 at 8.30 pm, this is a story of Avni, who chooses to continue supporting her parents financially even after her marriage. This show stirs you to question the societal norm, where a girl loses her right to support her parents by virtue of her marriage. Avni leads a change with Maayke se bandhi…Dor.

Apart from the content line-up reinforcing the thought, Star Plus will take the spirit of this campaign to its viewers through an engagement initiative called Tu Hi Meri Star Viewer Interaction Initiative. This digital initiative is a platform to give voice to the viewers and let them dedicate their ode to the special woman in their live and make her the ’Star’. This initiative will enable consumers to make their dedications through online posts, uploading photos, videos etc. and let other users vote for nominations and celebrate the best ones as the real stars!

‘Ode to the woman’ will also have a 360 degrees presence across all mediums of entertainment. Star Plus will reinforce woman’s immense significance in every Indian home and society at large through an aggressive radio, print and digital plan.