One of cricket's biggest communication campaigns kicks off worldwide with the launch of TVC titled ‘Tightrope’; watch the TVC here. 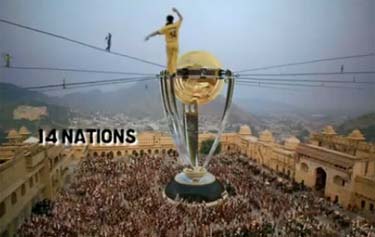 One of cricket's biggest communication campaigns kicks off worldwide with the launch of TVC titled ‘Tightrope’; watch the TVC here.

ICC has released one of cricket's biggest communication campaigns across the sub-continent for Cricket World Cup 2011.

The ICC Cricket World Cup is the biggest and the most prestigious tournament in the game. To be held across India, Sri Lanka and Bangladesh, the ICC CWC 2011 will witness 14 nations battle for cricket's most coveted prize. Conceptualized by the ICC Marketing Team and Ogilvy Mumbai, the campaign for ICC CWC 2011 shall arguably be the biggest to promote any sporting tournament in the sub-continent.

Navin Talreja, Managing Partner, Ogilvy & Mather says, "About 1000 matches were played between the last ICC Cricket World Cup and this one. Many tournaments, many cups but a World Cup in any sport has been and will continue to be the pinnacle of achievement. The postioning line ‘The Cup That Counts’ serves as a reminder to all cricket fans of this very simple fact.”

With this in mind, a surround campaign involving not just TV, Print, Outdoor, PR but also last mile mediums such has Digital and Activation was created for India, Sri Lanka and Bangladesh. Navin adds, "This time around we have moved away from the conventional amplification approach of the core idea across mediums. Instead the messaging strategy for different elements developed reflects different facets of “The Cup That Counts” from the point of view of the teams, players and of course the fans."

The campaign kicked off worldwide on the 1st week of January with the launch TV commercial titled ‘Tightrope’. Abhijit Avasthi, National Creative Director, Ogilvy & Mather says, “Every country, every player and every fan has only one wish - to win the race to the cup. But this is no ordinary race. Full of obstacles and surprises, to win this race, each player would need to literally walk on a tightrope. Keeping this in mind we decided to use a metaphor and depicted a tightrope race to the cup that counts”.

The 'Tightrope' commercial aptly captures the passion, celebration, competition and fun associated with the game of cricket like never seen before. Shot across the entire city of Jaipur over 5 days, the commercial 'features' captains from most of the playing nations and over 400 fans from various countries. Professional tightrope artists were flown in from USA and UK for the filming of this commercial.

This film has been shot by the Cannes Gold winning director Bob of Good Morning Films and the music has been composed by Dhruv Ghanekar. This launch campaign shall also be supported by print and outdoor, shot by international photographer Palani Chandramohan.

In addition, fans will also get to see another campaign featuring iconic players from the sub-continent. A series of 3 commercials starring Sachin Tendulkar, Muttiah Muralitharan and Shakib Ul Hasan respectively, this campaign plays upon a deep personal wish that these cricketing legends are fostering - to bring the cup home. These films have been directed by Piyush Raghani of Old School Films and shall go on air towards end January. This campaign too shall be supported by print and outdoor.

Additionally, cricket fans shall also enjoy the Official ICC CWC 2011 Event Theme Song titled 'De Ghumaa Ke' that has been released on radio channels across the country. Composed and sung by Shankar Ehsaan Loy, this song brings alive the fierce sense of competition and the desire to win. The same song shall also be adapted in local languages for Sri Lanka and Bangladesh. A music video featuring Shankar Ehsaan Loy and ICC CWC 2011's Official Mascot 'Stumpy' is also in the works and shall be released by end of this month.

Further, ICC shall also unleash a slew of contests and below the line initiatives to help spread the CWC 2011 buzz. Across venue cities, Official Countdown Clocks shall be placed at airports and popular malls, uniquely designed ICC CWC 2011 branded vans shall give fans a chance to share their wishes, radio stations shall run contests to help fans win tickets and much more.

As a part of ICC’s CSR and youth outreach initiative, Ogilvy also rolled out a nation-wide school contact program alongwith UNAIDS. The program reached out to 8 cities, 70 schools and above 10,000 students who got a chance to learn about AIDS awareness and also participate in an Inter School Mini Cricket World Cup Tournament.