Brings back Rin as presenting sponsor; ropes in Tata Docomo as the title sponsor along with other sponsors. 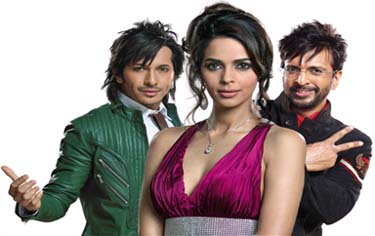 Brings back Rin as presenting sponsor; ropes in Tata Docomo as the title sponsor along with other sponsors.

Flagship dance reality show of Colors - Chak Dhoom Dhoom is returning from tomorrow in an improved format. The show Chak Dhoom Dhoom - Team Challenge will showcase dance enthusiasts in the age group of six to sixty who in teams of four or more will dance their way into your hearts starting January 14th every Friday and Saturday at 9 PM.

Colors has roped in Rin as the presenting sponsor for this season too. Besides, the channel has also roped in Tata Docomo as the title sponsor. Other associate sponsors that are on board are - Clinic All Clear, Visa, RR Kable, and Samsung Champ mobiles.

Colors is also doing a series of ‘brand integration’ with the sponsors of the show. For the presenting sponsor Rin, the channel will incorporate their brand proposition and tagline “Chamak Dikhao” in their episodes thus highlighting a winning streak which blends well with a dance competition like CDD. For the Telecom Sponsor Docomo, there are also unique digital & online VAS and content opportunities are being explored exclusive to Docomo fan clubs and communities. For the associates also, there are brand values being married into the content in seamless ways.

Chak Dhoom Dhoom –Team Challenge took the competition out of the studio to scout for the best dancing sensation across the globe.  After sitting through innumerable auditions and intense initial screening the esteemed jury members – Bollywood Diva Mallika Sherawat, Dancing Legend Jaaved Jaaferi and Ace Contemporary Dancer Terence Lewis handpicked 30 deserving groups. These chosen few will face some more music and dance, at the Mega Round in Mumbai to search for an outstanding ‘Team’. They will be judged on the basis of their choreography, timing, synchronization, team effort and appeal.

According to Ashvini Yardi, Head-Programming, COLORS, “The success of season one of Chak Dhoom Dhoom inspired us to launch the second season with some freshness in the format and unlike last season, this time, it's age no bar. We're looking at teams with age groups that may vary from six to sixty or even beyond. The idea to come up with a team challenge came to us while we were holding auditions for India’s Got Talent. During the auditions, we saw a lot of teams coming and performing a group dance. Since we already had a dance brand - Chak Dhoom Dhoom, we decided to provide a platform for all these dancing groups and came up with a new season with a new look and a great new panel of some very accomplished judges."

The auditions which were held across Baroda, Lucknow, Kolkata, Delhi and Mumbai in India and Dubai, New Jersey, Dallas, Bay View and London internationally, have identified some splendid talent across the globe and it will be a treat to watch these talent compete on the same platform this season. All the three judges are amazed with the talent they have seen across and are already looking forward to teams presenting different forms of dance like Cha Cha Cha, Hip Hop, Salsa, Tango, Jazz, locking and Popping to Bhangra, Kathak and Lavni.

Mallika Sherawat who will make her television debut with Chak Dhoom Dhoom- Team Challenge talks about her experience during the auditions, “I believe that if you have talent, you can achieve almost anything. I came from a small town in Haryana and look where I am today. All one needs is some hard work and lots of determination. I am looking forward to see these talented people put their best foot forward in the show. As far as the question goes about who I’m rooting for? It has to be the girls! There smart, they’re gorgeous and they can make men dance on to their tunes!”

Jaaved Jaaferi who is considered to be the ‘Baap’ of different formats of dance says “There’s so much to learn from everyone who comes on this stage that I hope by the end of the show, I get to take back something from the contestants. There are tiny tots who vow you with their dedication and golden oldies who make you wish you have that kind of enthusiasm left in you when the sun is setting in your own life”.

According to the King of contemporary dance, Terrence Lewis, “It is interesting to see different teams performing difficult feat and breath-taking steps and I am really anxious to see how they outdo each other in the show.”

According to Deepak Dhar, Managing Director, Endemol India, “At Endemol it’s our constant endeavor to create innovative programmes that excites viewers across various sections. After a successful first season we are delighted to launch the second season of Chak Dhoom Dhoom. We are happy with the amazing dancing talent we have got on the show and some of them are making waves everywhere in the world. With the launch of Second Season, we are taking this partnership to another level and bring in talent from not just the country but globally”.