The highest closing for a reality show in the year 2010-11 on TAM Peoeple Meter. 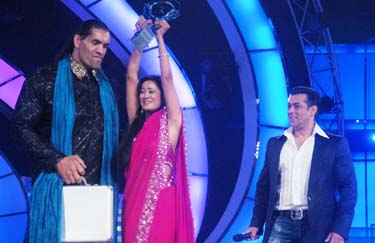 The highest closing for a reality show in the year 2010-11 on TAM Peoeple Meter.

You hate it but you love it. Colors’ flagship reality show Bigg Boss might have been in controversies through out the fourth season, but it has emerged as the biggest TRP puller at the end. People’s mandate has gone in the favour of Bigg Boss which was full of entertaining ingredients with the unique mix of contestants like a serial kisser Ashmit Patel, a giant wrestler the great Khali, a loud mouth Punjabi aunty Dolly Bindra, a Pakistani beauty Veena Malik, an ex-dacaoit Seema Parihar and above all on-screen marriage material Sara Khan.

The finale episode of Bigg Boss has delivered 6.7 TVRs on TAM people meter which is the highest closing for a reality show in the year 2010-2011. The grand finale episode was aired on 8th January, 2011 from 9 pm onwads.

The finale was hosted by the effervescent Salman Khan who was his flamboyant best throughout the show and kept everyone intrigued and entertained. The finale witnessed the dance performances of its current and past contestants on the foot-tapping numbers of Bollywood.