Its climate change campaign My Earth My Duty recognized as Best On AIR CSR campaign. 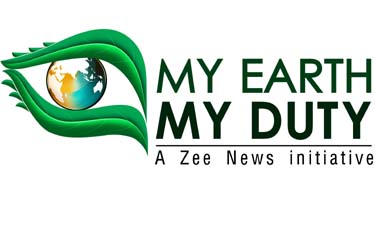 Its climate change campaign My Earth My Duty recognized as Best On AIR CSR campaign.

My Earth My Duty, a Zee News’ Climate Change campaign has won the coveted “Rashtriya Rajiv Gandhi Achievement Award 2010 for the Best On AIR CSR campaign in recognition of the strength of a campaign that planted over 73 lac plants in a day and inspired millions of people to plant trees across nation to preserve the nature again worsening environment.

The award ceremony took place at JW Marriot, Juhu on 08 Dec with more than 300 guests. The ceremony was attended by noted personalities from Social & Media fraternity who were awarded for their insignificant contribution in their respective fields.

MY EARTH MY DUTY was  launched on World Environment Day (5th June 2010) and  aimed at engaging  members of society to sensitize and encourage them towards mitigating the effects of Climate Change. Spread over a period of 3 months, My Earth My Duty ended on 25th August 2010. It reached out to more than 2.5 lac villages and 1 crore volunteers.

At a time when other news channels are concentrating on frivolous  cinema based content, Zee News understands its role and responsibilities in reaching out to the masses and initiating a change whenever and wherever required.

Rohit Kumar DVP Marketing, Zee News and the brainchild behind the campaign said on this occasion “As nation’s only credible news channel, we understand our duty. Zee news has always pioneered in doing such CSR campaigns effectively on ground by spreading a positive change. We will continue to focus on such initiatives in the coming year as well. We sincerely thank all our partners for the support extended. The appreciation received will motivate us to take this to the next level.”