TAM data for specific TG which includes all India 1Mn+, CS 25+ AB Male audiences keep the channel ahead of competition. 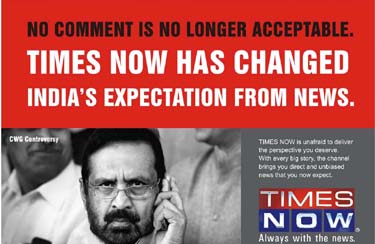 TAM data for specific TG which includes all India 1Mn+, CS 25+ AB Male audiences keep the channel ahead of competition.

TIMES NOW, India’s most watched English News channel emerges as the No. 1 channel in 2010. TIMES NOW has now attained the leadership position for 3 years in a row.

According to the audience measurement data released by TAM (Television Audience Measurement), TIMES NOW’s news-centric strategy combined with its insightful feature content has contributed towards establishing TIMES NOW as the undisputed leader in English News Channel space in India. This has reinforced the position of TIMES NOW as the channel that has changed India’s expectations from news.

In terms of Prime time viewership, The Newshour, TIMES NOW’s flagship News show has consolidated its position  as the most watched News show on English News television for the 3rd year in a row with 36% viewership share as compared to 29% and 22% for CNN IBN and NDTV 24x7.

2010 has seen events that have redefined television journalism as we know it – Key events like the IPLGATE to Common Wealth Games, Adarsh Society to the latest 2G Scam, aspects which changed National Agenda and created a new trend in the way news is presented.

Speaking about the year Sunil Lulla, CEO TIMES NOW says, “TIMES NOW has made it its mission to be ‘Always with the news’ – whether it’s the big events or it’s the daily news; triumph or tragedy. These numbers tell us that what we do is meaningful to the viewers for whom we work 24 x 7”.

TIMES NOW has scripted a growth story in TV news unparalleled in terms of traction in viewership, leading over competition and becoming the most watched and preferred English news channel. The focus on news, responsible and unbiased reporting and passion for news journalism gives TIMES NOW the clear edge over competition to emerge as the undisputed leader in English news space.